Gold's Tumble and the Dollar's Future

Have questions about gold's fundamental roles, the changing outlook for the US dollar or other trading, market or strategy questions? Bring them to the weekly Trading Q&A webinar hosted on Tuesday. Sign up on the DailyFX Webinar Calendar

On a technical basis, gold has suffered a remarkably consistent retreat over the past three months. The commodity punched as high as $1,365 on an intraday basis through April 11; and through Monday's low, it has dropped more than 9 percent. That is a remarkably bearish swing but not unlike the strong trends this commodity has muscled through over previous months. In this most recent dive, we have come upon a questionable level of support. In the $1,240/45 area, there is a confluence of trendline, range floor and a popular pseudo-Fibonacci level. The mid-point of the past five years' range is directly in this vicinity. None of this technical charge carries any material weight however. The Dollar's situation looks like a mirror to the metal's own performance. Whether we are referencing the trade-weighted DXY or an equally-weighted alternative index, the Greenback has struggled to translate a would-be meaningful, technical bullish break into a meaningful extension of trend. Whether support or resistance, Dollar or gold; progress matters less with the technical cues triggered and far more in the fundamentals behind the drive. 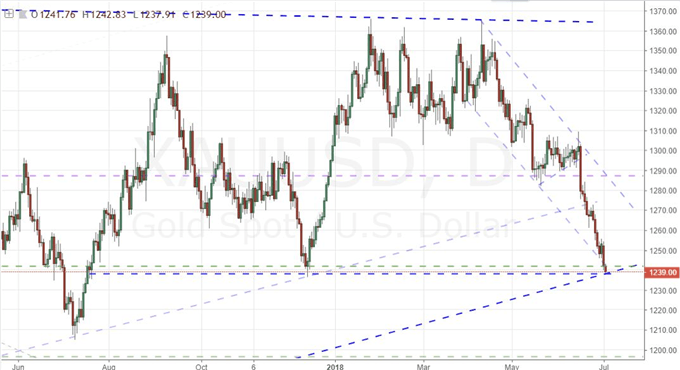 Gold is considered a salve for many financial troubles. Yet, the many traditional roles the asset is considered to play have clearly not provided motivation for a clear and persistent trend. The least relevant role currently employed is its appeal as an inflation hedge. There is very little excess price growth across the world which would in turn undermine the value of financial assets and drive capital to the safe confines of the commodity. More appropriate but not yet fully engaged its role as a safe haven asset. Here we have seen trade wars arise and bouts of volatility that have pushed investors to the kind of security that generations have come to expect from gold. The issue we currently face is the inconsistency in sentiment and the conflict of an evolving picture of what investors are really looking for when fleeing uncertainty. The appeal the market represents as an alternative to traditional 'currency' is by far the most lucrative potential for this alternative market, but that requires a certain extreme charge. 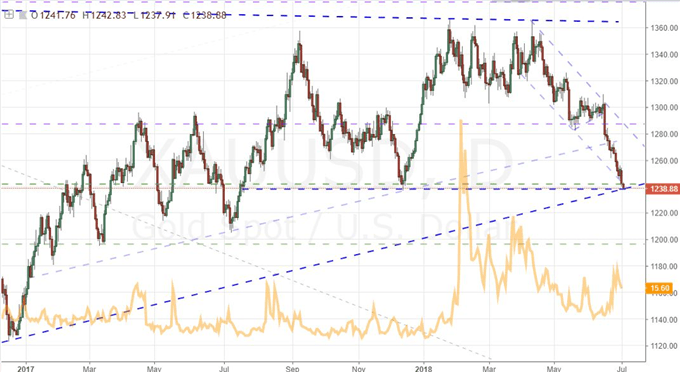 Before we start to see the financial system start to show signs of extreme strain, we will likely see gold pick up much of its trend and pace from the US Dollar. The benchmark currency is the primary pricing metric for the commodity for a practical connection. Between the two, there is a clear contrast in rate speculation reaction but the safe haven connection between the two tends to balance. Yet, there is nuance that makes this equation far more interesting - some would say complicating. The Dollar's own fundamental motivations have been significantly warped with time and circumstance. The Fed's hawkish drive has provided a clear contrast on which to devalue a commodity that provides no yield. What's more, the troubling lack of lift through 2017 despite three Fed hikes makes this currency far more at-risk to a downgrade in rate forecasts than the alternative. Furthermore, the conditions of trade wars make the Dollar uniquely exposed to future waves of risk aversion that follow the systemic path that has reshaped the global forecast. 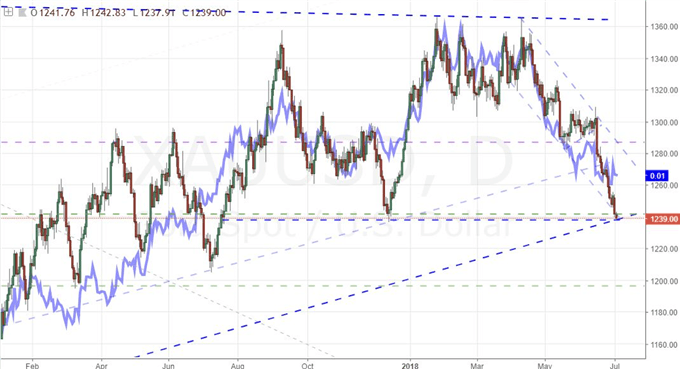 From gold, we can learn some of the critical fundamental qualities unfolding behind the dollar - which in turn can signal whether a market move will last or stall and retreat. That connection can also work in reverse. Yet, it is the relationship between the two and that concerted evaluation of the financial system that presents the most value. Where high level and over-extended risk assets (like equities) retreat while both gold and dollar advance, we are likely dealing with a restrained risk aversion that is an impractical trend to maintain given all that is at stake following years of build up. If we see a full-tilt financial panic, gold itself is unlikely to find a strong bid immediately in response as we saw in 2008 during the Great Financial Crisis. Yet, if that financial crisis comes with an unexpected Dollar drop, the metal will likely play a critical alternative which in turn signals a unique and lasting brand of deleveraging. The most remarkable and fully disruptive situation would be a panic that draws heavy skepticism over the already-extreme level of global monetary policy and the lack of further leverage these groups have left to affect change. That is one of the few scenarios that could reasonably set $2,000 as a viable bullish objective. We focus on the relationship between gold and the dollar as well as what it means for the markets in today's quick take video. 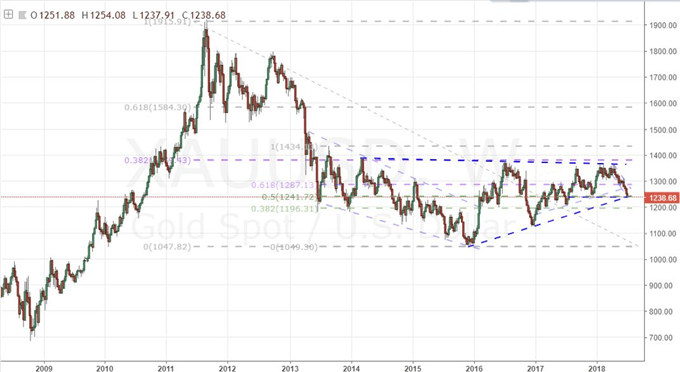