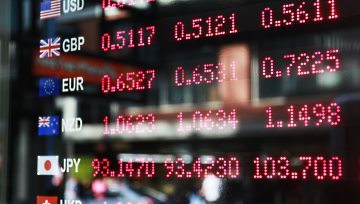 Global equities are starting to have that 'look’ again, with the DAX rolling over rather hard and breaking important support and the S&P 500 looking ready to test a very important bull-market threshold soon. Gold remains poised for lower prices, while WTI crude oil is holding up well, but the Brent contract might be building a more bullish chart pattern.

DAX decline picks up steam after break of support

We also discussed the broad head-and-shoulders top dating back to last June, which could come soon to implicate a much larger, sinister drop if the neckline is broken. It will need more time, so we'll discuss this further at a later time should it become relevant.

S&P 500 headed for a collision with major support

The S&P 500 broke down below the tops in May around the 2742-area, positioning itself for a very important test. In the area of the 2680/65 lies the February 2016 trend-line along with the 200-day MA, confluence which has kept the market afloat on three occasions since February.

The thinking on this end is that a fourth test won’t turn out so well. A failure to hold this bull-market ‘line-in-the-sand’ could spell big trouble as the summer progresses. But, as always, we must respect support until broken.

Gold continues to trade lower in-line with expectations, with the 1240s/30s as the targeted zone of support for the current move. Down below lies the December 2015 trend-line and December low. There is a lower parallel ahead of the zone; however, it’s not viewed as significant given the selling pressure.

WTI stronger than Brent, but the latter building a bull-flag

WTI recently proved again the strength of the July slope by not only holding it, but also it found a strong bid shortly thereafter. It remains a big ‘line-in-the-sand’ for both sides of the tape. While WTI has been stronger than Brent, the bull-flag forming in the UK contract could make it more appealing from the long-side. It would be ideal for a test of the one-year trend-line before breaking out, but not necessary to turn the bias bullish. A breakout from the bull-flag should have Brent rallying in-line with the longer-term trend. 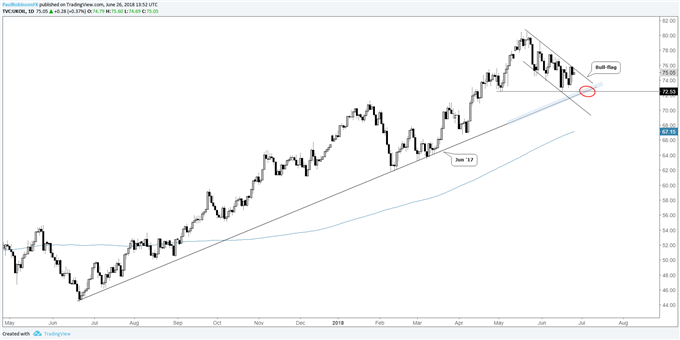