See how retail traders are positioned in Gold following Friday's fireworks on the DailyFX Sentiment page. Want to know how the fundamental themes influencing the commodity are developing, join me for my Fundamental Trading Webinar on Monday. Sign up here on the Webinar Calendar.

How much of the remarkable volatility that closed out gold's week Friday was the result of a motivated fundamental thrust from the bears versus a necessary balance to extreme quiet? For context, the precious metal notched an impressive 1.7 percent drop to close out this past week - the biggest drop since May 15 and second largest single-day tumble since November 2016. Technically speaking, this move cleared the floor of a wedge that had developed over the previous three weeks, took out two medium-term Fibonacci retracement levels and represents the lowest close since December 26th. The final move was definitively bearish, but it didn't start out that way. In fact, Thursday, gold actually rallied following the ECB rate decision to extend its QE program through the end of the year and in turn cleared the upper bound of the same technical wedge. So, what we are left with was a false break reversal. What's more, activity through Wednesday registered the lowest activity level (measured through a 20-day, 1 trading month, ATR) since 2000. It is only fitting that a sharp break follows a bout of inordinate quiet. 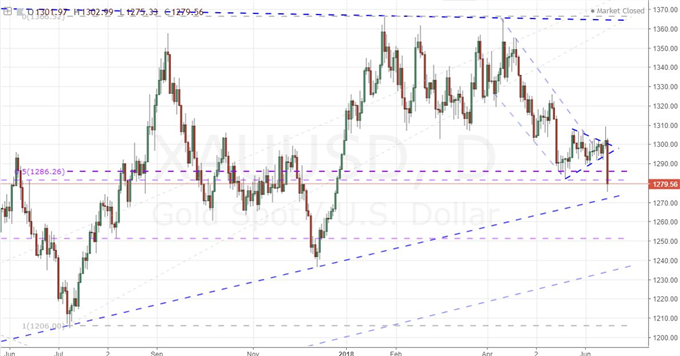 Working Out the Fundamental Motivation

While this past week's resolution to an extended period of quiet is more likely the result of speculative necessity, that doesn't bar us from a future where a dedicated fundamental trend starts to carry the commodity to its next trend. The question traders should be asking themselves is what has the greatest capacity and probability to set the market's course. There is a range of fundamental influences that could direct gold to its next move, but the most loaded threat/opportunity exists where liquidity runs deepest. Commercial and jewelry use are frequently quoted as practical motivators of supply and demand, yet the capacity of their influence pales in comparison to two more thematic currents: safe haven and alternative currency. 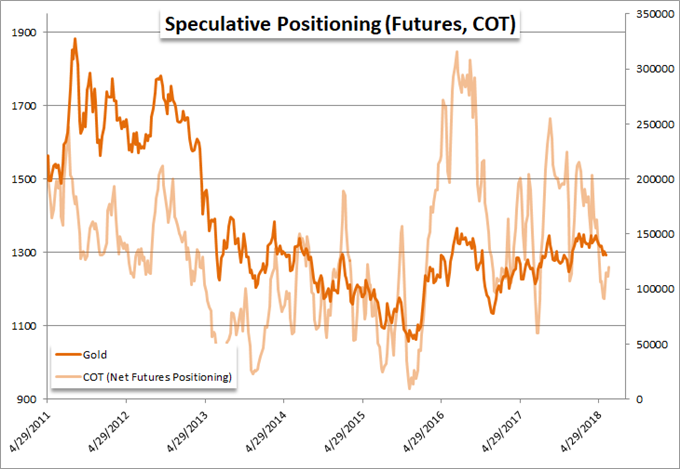 For those that have invested across assets - and especially over time - gold's role as a safe haven is a familiar one. A refuge from panic is defined by confidence in stability and liquidity. The precious metal's capacity to play that critical outlet has been proven over centuries. This particular status has only solidified itself over recent years, however, as some of the favorite alternatives have been materially distorted by financial conditions. In particular, government bonds from top credit rated countries have seen their value eroded substantially by dramatic rise of stimulus programs. It is that same diversion for safety that caters to the more prolific 'anti-fiat' appeal in the commodity. More and more, the threat of a wide risk aversion promotes the appeal of the metal as Dollar, Yen and Swiss franc find themselves undermined by circumstance.

If the Markets Fall Apart, Treasuries or Gold

When financial markets go haywire, we don't have the luxury to calmly weigh out all the pros and cons of the various options we can diversify into. Panic raises the demand for liquidity and reverts many to an autopilot that draws from historical norms to pursue the best areas of protection. Yet, there is a problem with the primary standard bearer: US Treasuries. The US government bond was heavily inflated by the deep appetite of the Federal Reserve during the wholesale drive during the three QE iterations. That effort has since hit its peak and has started its long and slow unwind. This spills into another and more systemic outlet for potential gold demand: restrictions in FX-based alternatives. Extremely easy monetary policy other major central banks - ECB, BoJ, BoE - may seem to bolster their apparent safety, but it limits their capacity to absorb any serious shock and it diverts funds away during flush times. Normally, that only further concentrates the appetite for the most liquid currency in the world, but its own issues are compounded by the fact that trade wars increasingly an existential threat to the Dollar's status as the world's unquestioned reserve. We discuss why the greatest potential for gold moving forward amid any likely fundamental upheaval is for a massive rally. We focus on gold in this weekend Quick Take Video. 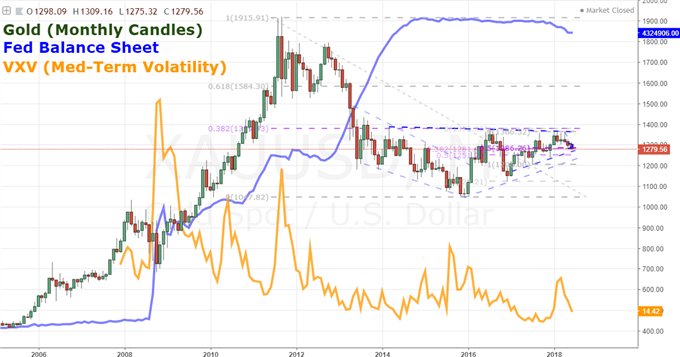