If you are trading the Euro's volatility and large swings or simply keeping track of monetary policy's collective influence on risk trends, watch our live coverage of the ECB rate decision. See the evolution of positioning using the DailyFX speculative positioning data on the sentiment page.

The ECB Versus the Fed

It is difficult to choose two central banks that present a greater contrast in monetary policy bearing that the Federal Reserve and the European Central Bank (ECB). It just so happens that these two largest central banks happen to be deliberating on their paths back to back. And, as it happens, the ECB's settings Thursday are likely to generate a stronger response in both volatility and trend development from the Euro than the Fed did for the dollar. Even more profound, the European bank's forward guidance may have even greater influence over global risk trends than its US counterpart's actual tightening efforts. The unexpected balance of power is more than evident in the course struck by the EUR/USD both in the past session and past year. Following the Fed's decision to raise rates and moderately accelerate its projected path through 2018 and 2019 Wednesday, the Greenback would actually lose ground against the Euro. Should the ECB legitimately start down the path of policy normalization following Thursday's meeting, the speculative contrast may be solidified, but so too will the mystique of an undervalued policy forecast evaporate. 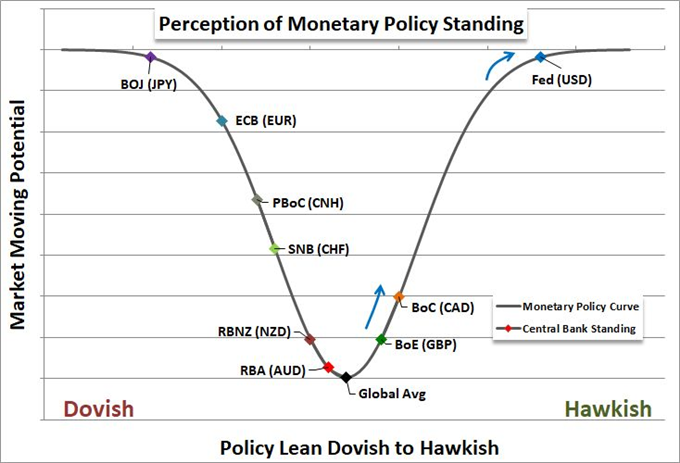 What is On Tap for the ECB

At the end of the day, the European monetary policy authority is almost certain to keep its primary monetary policy setting unchanged. That means the benchmark lending rate is likely to remain anchored at 0.00 percent (the deposit facility at -0.40 percent). However, when it comes to the unorthodox quantitative easing program, there is debate over the outcome. Though data has not been particularly robust for the hawkish in the central bank, the rhetoric from individual members has grown noticeably more hawkish. This is likely a concerted effort to steer market anticipation for an eventual course change towards normalization. Generally, the ECB will want to steer out of its dive into extreme easing in order to rebuild a buffer for future economic or financial troubles. However, this policy authority does not have the same degree of fundamental backing for a risky course correction as the Fed does in US data trends. What's more, it doesn't have the deep complacent backdrop that the Fed initiated its turn through.

Where the End of ECB QE Can be Bullish and Bearish

The Fed's turn out of its stimulus drive is a great example of how the market values speculative forecast over current yield. If we look to the Dollar during the US central bank's gradual turn out of its extreme easing course, we find that the gains for the currency really did not come during the actual moves to raise rates. The first rate hike from the FOMC came in December 2015, but the vast majority of the progress made by the benchmark currency came over the preceding year. Markets are forward looking, and the recognition that the central bank was setting out the course of normalizing first with a full taper set the speculative gears in motion. The ECB is still in that contemplative stage, but how much of that discount has already been retraced? The Euro gained through 2017 amid growing speculation that the turn is just around the corner. Has the low hanging fruit already been harvested with last year's recovery? Further, with risk trends starting to falter across the financial system, the market's appetite to afford value to early speculation is likely substantially diminished right when the ECB seems prepared to move.

While I am more of the mind that the ECB will lay out a clearer path towards normalizing an extreme dovish policy, I also believe it will fail to earn the Euro the same clear and progressive recovery opportunity for the Euro that the same conditions afforded the Dollar three years ago. That said, I like to come into a key event with options just in case the markets decide to take the unexpected course. If the ECB decision stokes a legitimate Euro rally, I am partial to: EUR/JPY for its historical carry trade status; EUR/CHF due to the francs tendency to bow to a more influential Euro and EUR/CAD where the Canadian dollar is poised to lose ground. For a bearish unfolding of events, EUR/USD will seize upon the build up in contrast from just this week while EUR/AUD and EUR/NZD bow to undervalued carry currencies. We discuss this event and how it can play out for the Euro in today's Quick Take Video.