USD/JPY is working its way closer to the head-and-shoulders pattern we began discussing earlier in the week. AUD/USD is being forcefully rejected from a cross-road of resistance, bear-flag coming further into view. USD/RUB looks headed for another big move, while gold also looks to be readying itself for a move of its own.

Trading is extremely challenging without confidence, check out these 4 ideas to start building your confidence today.

USD/JPY is turning down after peaking just around the 200-day MA, and with the turn down comes the possibility of a ‘head-and-shoulders’ pattern. It won’t be fully validated of course until price trades through the neckline, but certainly a possibility in the week ahead. 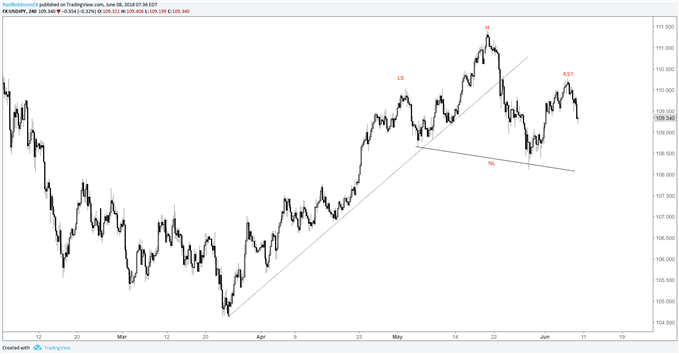 For the intermediate-term fundamental/technical outlook, check out the Japanese Yen Forecast

AUD/USD was rejected from a cluster of lines (confluence of resistance) as one might expect to happen, but with it comes the further development of a more bearish price sequence via a bear-flag. The flag is nearly a month old, so should we see a breach of the under-side trend-line soon, a sizable move lower could develop.

Here is a pair we don’t discuss often, but the tantalizing prospects of another major move are too much to ignore. The symmetrical triangle building over the past two months suggests an explosive move could again develop soon. The combination of strong trend higher prior to its development and long-term support around the 61/60.50 level give the edge to longs. The size of the pattern implies a measured move of around 5 points, or up to ~67.

While gold has seemed like a ‘dead’ market, it’s not one to sleep on at this time. Not with the triangle forming between the December 2016 trend-line and bottom of the multi-month range which dominated trade most of this year. Other markets have been on the move, it seems about time gold gets into gear and makes a move soon.

A break below the 2016 trend-line will have shorts in play, while a break back inside the range gives longs the upper-hand. Given trend and lack of support on a breakdown, shorts seen as likely to offer up the path of least resistance.