Our Elliott Wave analysis is suggesting USD weakness in USDJPY and EURUSD while Crude Oil may continue its downward correction.

The video above is a recording of a US Opening Bell webinar from June 4, 2018.

In our last webinar, we cited how the USD patterns look weak driving USDJPY lower with an initial target zone of 107.25-108.80. USDJPY prices have since fallen to 108.11 so is that all of the correction?

It is possible to count the correction lower as complete. However, there is another Elliott Wave count that suggests another dip to below 108.11 (labeled below). We can count a small degree impulse wave from the May high that suggest another down leg may be on the horizon.

The key level to monitor is the May high at 111.40. So long as the USDJPY price remains below 111.40, the market is at risk of further losses.

A move below 109.07 increases the odds of further losses to below 108.11 as USDJPY may be in the middle of a bearish zigzag pattern labeled a-b-c. We do believe this correction will be a partial retracement of the March 23 up trend and hold above 104.63 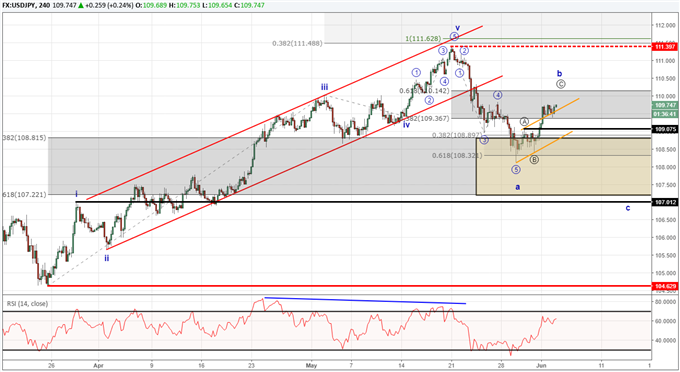 It took a while, but crude oil finally reversed lower once it completed its longer-term pattern. We wrote back in early May how the longer-term crude oil price patterns nears a terminal point with some wave relationships in the $71-74. After topping on May 22, crude oil prices have fallen nearly 10%. Most Elliott Wave patterns continue to point towards lower levels especially on a break of the blue trend channel.

A break below the blue trend channel may send crude oil prices down to $58-60 with even lower prices possible. The bottom line is that we may see a deep correction in the latter part of calendar year 2018. 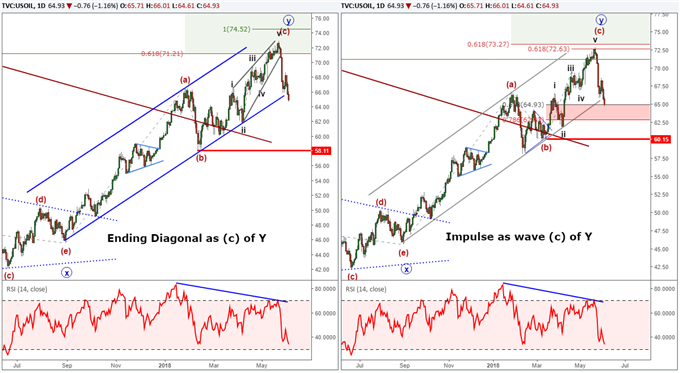 Though news has recently been bearish EURUSD, the Elliott Wave pattern calls for a relief rally up towards 1.18-1.20. We have been short EURUSD with our first short entry at 1.2350 and our 2nd short entry at 1.2153 as prices hit our first target of 1.1554 on May 29. The Elliott Wave patterns still point towards lower levels over the medium term though several short-term patterns point to 1.18-1.20.

We need only to be concerned about the downtrend should EURUSD press up to 1.2155 or higher. 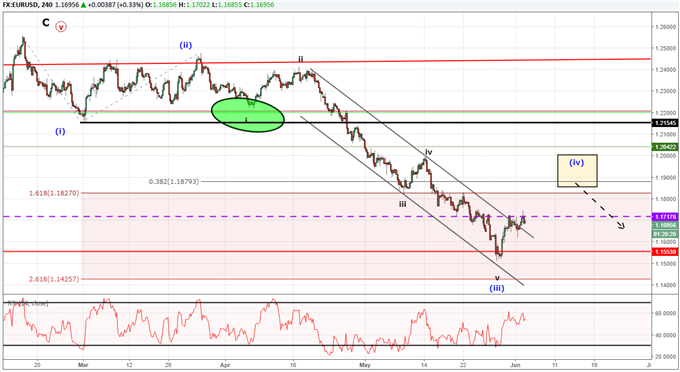 * 3 things I wish I knew when I started trading forex

* What is the impulse wave pattern and how do you trade it?