Dollar Recovery May Also Claim Gold and Oil as Victims

The Dollar is the Benchmark Currency and Pricing Instrument

Though there are many reasonable complaints made over the strength and viability of the US Dollar, there are no practical replacements for the type of benchmark that it represents in the financial system. In terms of liquidity and economic clout, the Greenback is without match. That role has establish a level of innate expectation as to where money will flee when panic sweeps over the financial system and stability of funds is the only thing on traders' minds. For exchange rates, the USD's central position is easy to establish and rarely debated in a significant way. Data from the Bank of International Settlements, major developed-world central banks and other statistics resources indicate that the Dollar accounts for the bulk of FX transactions executed in the market. However, it is also a critical pricing instrument for many of the key commodities in the system. Regardless of the country we are in, pricing for energy, metal or agricultural commodities is often made in Dollars. That creates an obvious influence in these natural resources prices when the measure used to value their cost holds the risk of meaningful fluctuations.

Conviction in the Dollar Matters When Other Themes Conflict

Given the nature of the Dollar's role as the benchmark for valuing so many different financial and physical assets, there is considerable power to wield. That said a move of conviction is necessary for the Dollar to earn a universal impact across the financial system. Absent an all-consuming drive, even the world's most liquid currency will struggle for influence over distracted assets. A great example is the USD's lack of influence over EUR/USD through 2017. Despite a clear monetary policy advantage, the Euro managed to muscle an advance on the backing of an explicitely speculative forecast - rate speculation far out the curve for the ECB. What was there to stop this push towards a questionable and distant future value? Oil is of a similar afflication. Where the Dollar has is the primary method of pricing the commodity, the natural resource itself is caught in a supply-demand riptide that easily overwhelms a drifting USD.

For the major commodities, there is no more distinct relationship between currency and asset price than with gold. The statistical correlation - a 20-day rolling basis - shows an extremely tight, negative relationship (over -0.90) which suggests currency and natural resource move in the opposite direction at approximately the same timing and intensity. This precious metal's motivations are more defintively founded on financial means. In the incredible climb between 2008 and 2011 - on the way to a record high above $1,900 - the motivation was a collective depreciation in the world's most liquid currencies amid intense monetary policy accomodation. In other words, there were no alternatives when looking for an alternative to traditional 'cash' outlets, so market participants reverted to this historical fall back for physical money. The recent rebound for DXY has pushed gold to its 2018 range support. A continued pressure promoting a bullish Dollar view, will likely force the floor, but momentum will not be a ready feature. We need a tangible USD motivator to truly carry the metal lower. That said, should risk aversion falter and bring the benchmark crurency down with it as a latent carry currency; the bullish leverage it would foster for gold's bullish potential would be extraordinary. 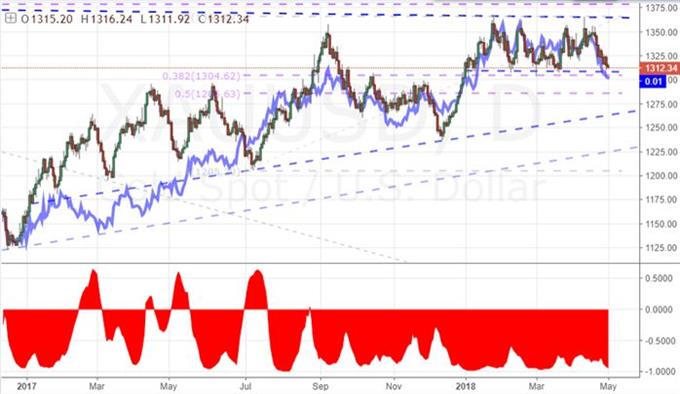 Compared to gold, oil's correlation to the US Dollar is volatile and not presently distinct. It is certainly true that the energy product is primarily priced in the currency whether the transactions are made in the US, Europe, Asia or Middle East. That said, if the currency's fluctuation is not significant, there are more pressing matters to control the day-to-day and week-to-week movements. Recently, a return to supply-and-demand interests have taken up the cause of trend. The threat that the United States will back out of its Iran nuclear deal has the global community on edge. The threat that this important economic relationship can fall apart and curb both an important source of energy supply as well as the largest source of demand for regional oil is to distract from. That said, a strong and persistent swing for USD can strong arm any other concern. Certainly discussions of China attempting to build critical mass for the Petro-Yuan to replace Petro-Dollar is dubious justification for a permanent bifurcation. We discuss the Dollar's potential when it comes to key commodity trends in today's Quick Take Video. 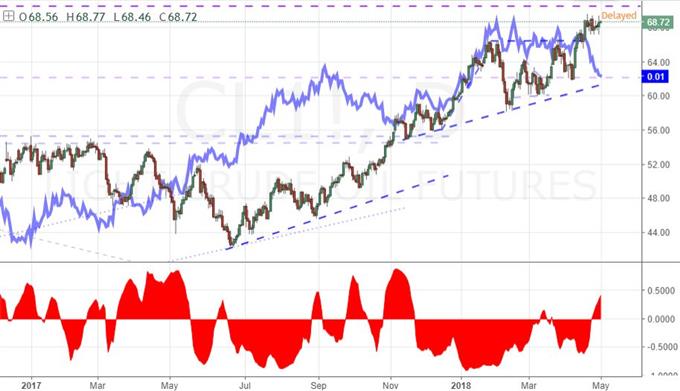