FX Markets Show Speculative Complacency Has Not Been Resolved

The Rise in Volatility Drew a Crowd

The start to 2018 brought with it a change in perspective for many market participants. A shot of volatility for equities and other favored capital markets was the first serious jolt many traders who have only been in the markets for a short period had ever experienced. Even for the more practiced hands, it was an unusual sight in nearly a decade of passive, bullish progress. Yet, with the first sharp drop in the S&P 500 and its counterpart surge in the VIX; people started to recognize that we could face a retreat in the foreseeable future as complacency and the carry over enthusiasm of previous monetary policy could not hold back the forces of a natural market forever. And, to a certain extent, the charge of volatility was a welcome development. Years of complacency created a sense of uncertainty with record high market prices and unprecedented low rates of return. A shock of declines seemed to be a pressure relief which kept the long-term prevailing bull trend in place. That said, the retreat was not exactly the cleansing fire that has opened the door up to the next run to record highs.

A Notable Disparity for FX Markets

While benchmark equity indices offered priced-based and derivative-sourced volatility readings that were without compare dating back years. Much of the FX market seemed virtually untouched by the speculative shudder. There was retreat among the traditional 'carry' currencies and a notable decline in the Yen crosses, but the swoon didn't stretch much further than these typical suspects. There certainly wasn't a meaningful response from the most liquid exchange rates. From the EUR/USD, a persistent bull trend actually turned into the 1.2600 to 1.2150 range that we watch the benchmark shape for essentially the entire year thus far. Looking to options to derive an implied forecast of activity, the Deutsche Bank FX volatility index barely moved as the VIX posted the largest swell in its history. In fact, the currency market's activity reading finds itself settling back at levels last seen in the Summer of 2014 - the most reserved period of trading on record. And yet, the risks that charged and triggered the capital markets are just as meaningful for exchange rates and they are still very much churning. 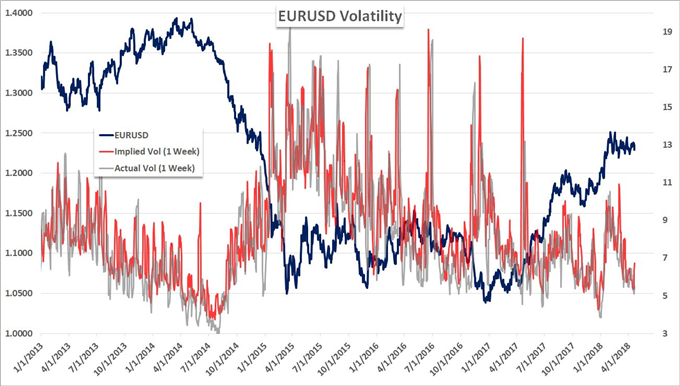 Why Have FX Market's Avoided Panic Thus Far and Are They Ultimately Immune?

I propose that the themes and events that unsettled equities, fixed income and other traditional assets are very much important and market moving for FX. So then, why has this particular asset class avoided the upheaval thus far? In some cases, the fundamental conventions create uncertainty with speculative assumption overwhelming tangible development. For example, the normalization of monetary policy has seen the Euro rally despite an outlook that is more forecast than practical assumption while the Dollar backed by the Fed's steady pace has lost its lift. Another source of uncertainty arises from a sense of conflict between market forces. Political risk posed by the escalation of a trade war between the US and China can signal a risks-based response from the Greenback while the risk also seems more concentrated for the Dollar given the isolationism that arises from the United States' actions. These factors can confound the market for a time, but eventually markets will commit to a bearing.

The Risk and Opportunity of EUR/USD, GBP/USD, USD/JPY Volatility

If volatility continues to churn, the spark will eventually catch for currencies. That being the case, there are remarkable opportunities particularly for the most liquid crosses. EUR/USD is remarkably overbought measured on a positioning, monetary policy and traditional economic basis; yet the coming week's implied volatility readings remain exceptionally low. That is particularly remarkable given the Dollar's known 1Q GDP reading and the ever-present risk of another surprise policy change from President Trump. For the Euro's part, the ECB rate decision is on tap and the group's President this past week seemed as if he was trying to pump the breaks on expectations for imminent sign of policy exit while also attempting to talk the currency down. The Cable's outlook for volatility is equally tepid, with Brexit and BoE expectations deflating after a week of weak data and an unfavorable vote for the government by the Upper House. Then there is USD/JPY which seems well positioned for reversal on a technical basis and has realigned itself to risk based movements in other areas of the financial system. We discuss the passing of resilient, low volatility for the FX market and the trade potential it represents in this weekend Quick Take Video. 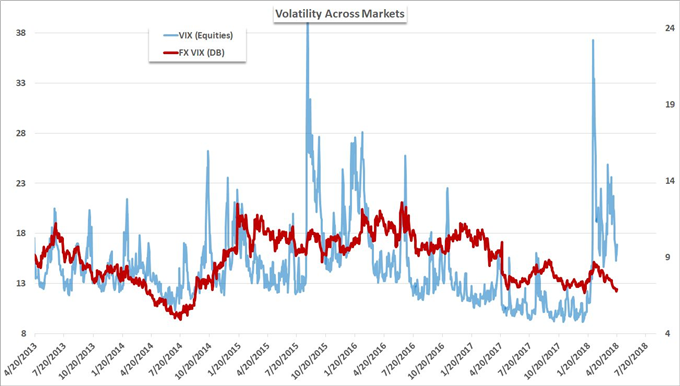