We have already navigated through 16 major central banks' rate decisions this year, and the market impact from these otherwise important events has been largely restricted. The Bank of Canada's (BoC) upcoming policy event may prove an outlier to this norm however. When we consider the state of global monetary policy, it should come as little surprise that the market is particularly responsive to these deliberations whether they come from the Federal Reserve, the European Central Bank or the Bank of Japan. Broadly speaking, the world is sporting one of the most accommodative (read 'dovish') policy standings on record. That means low interest rates and deflated volatility for the most part. Even the early efforts to reverse course ('normalize') come with curbs. First waves of rate hikes and QE unwind still leave extremely thin yield and abundant liquidity. From the Fed's efforts itself, the fastest pace and one of the highest rates is even curbed for potential thanks to an extremely transparent forward guidance. 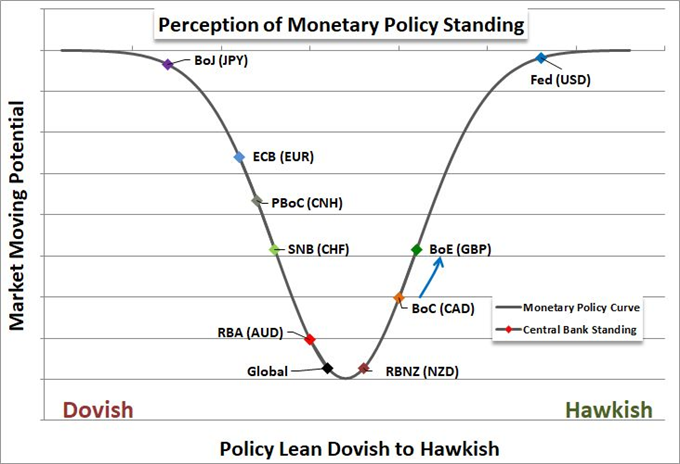 Why the Bank of Canada Decision is Different

Where much of the market-moving potential of monetary policy events is disarmed is the clear and heavy anticipation. Either it is clear that the groups have no intention to tighten anytime soon, or like the Fed, they telegraph well in advance. For the BoC's path though, there is considerable debate. Through the outlook of the entire year, the markets - through swaps - are pricing in a near-certainty of another rate hike. That puts it in a unique stratosphere among its peers as one of the few major central banks that is even considering tightening. Add to that picture the close to 50-50 chance of a hike by its mid-year milestone (the late May meeting) and speculative impact is more tangible. For today's meeting, the market's afford only a 20 percent chance of another lift, but there is plenty to account for in anticipation, which will keep the market highly tuned to what the Governor Poloz and his colleagues signal 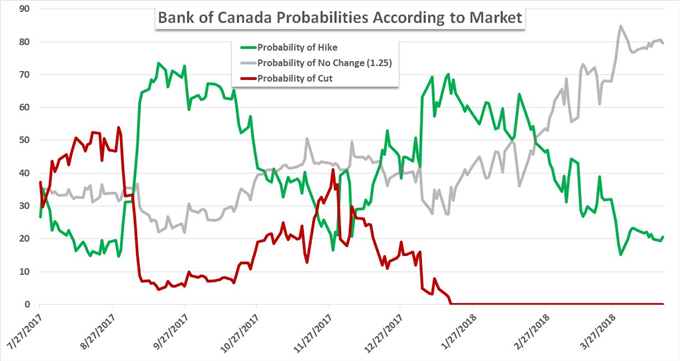 The Activity of the Canadian Dollar

Another aspect contributing to the potential in this event is the activity of the Canadian Dollar itself. Through the opening quarter of the year, the Canadian Dollar dove aggressively and persistently. The decline was an earned one between the unfavorable sentiment surrounding NAFTA negotiations, the threat of a blanket US tariff on imported steel and aluminum, and the downgrade in BoC rate forecasts. After a deep dive that put the market in to a technically oversold position, the fundamental picture started to shift for the better. Canada won an exemption from the US tariffs, optimism started to show through in negotiations and the rate speculation started to stabilize alongside data. In turn, the Canadian Dollar retraced more than half of its earlier losses in just the past month. The Canadian Dollar has been remarkably active over this period, which will make it even more sensitive to what is on the docket ahead. 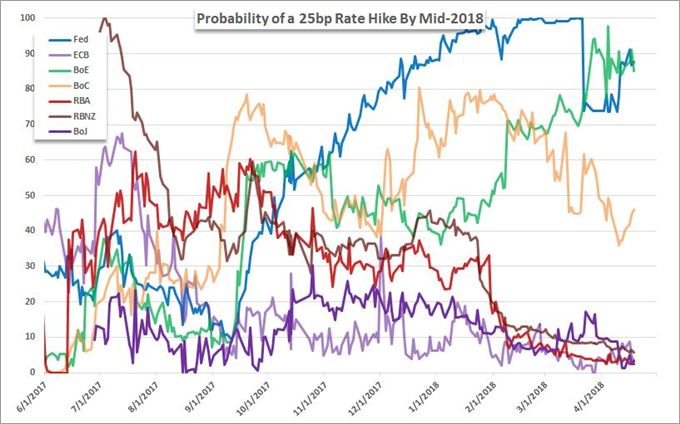 There are a few things I will be looking for in the BoC rate decision. First and foremost, the speculative rank will look to any indication of how likely a hike in May is. At close to 50 percent, it is easy to tip the probabilities in or out of favor of this unique view. Rhetoric that focuses on inflation rather than economic concerns for example could signal to the attentive speculator that favor has been cast. However, I would also keep tabs on the central banks assessment of how trade wars can impact this trade-dependent country as well as the trouble that can arise from financial excesses (such as housing and general debt). As for crosses, looking for bullish cases for the Loonie may find pairs that have already traversed significantly; but that is where the momentum is most favorable. I like NZD/CAD and EUR/CAD as they haven't covered much ground yet, but CAD/CHF and CAD/JPY still have potential. The list is short for what pair is best served for a Canadian Dollar retreat, but I think AUD/CAD is one of the best technically staged pairs. We focus on the BoC rate decision and its potential in today's Quick Take Video. 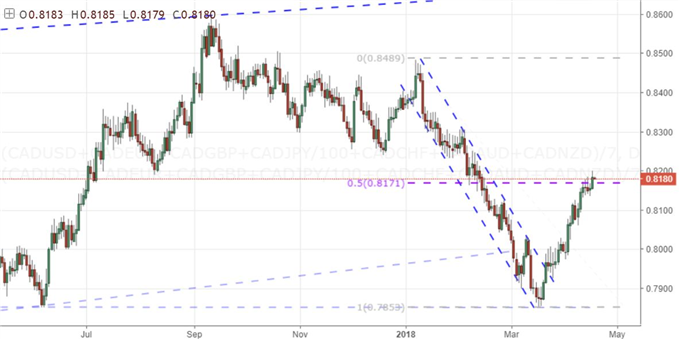