The S&P 500 continues to be quite volatile around the 200-day, February 2016 trend-line; the range should give-way soon. The Dow chart has a clear descending wedge developing. US and UK oil contracts have significant support lines to watch, while in gold we await another range fade or breakout.

For in-depth fundamental and technical analysis for your favorite market or currency, check out the newly released DailyFX Q2 Forecasts.

The S&P 500 continues to be volatile around the 200-day MA and trend-line from February 2016. While only modestly, the swings are beginning to contract, which suggests a little more contraction before a resolution (triangle breakout). The best tactical approach at this time appears to be standing on the sideline until we have a confirmed resolution.

Turning to a chart of the Dow, it is carving out a broad descending wedge. Given the volatile nature so far this year, and where it is taking shape in context to the trend, a downside break is seen as the most likely outcome. A break below the underside of the pattern and 200-day MA will have the S&P 500 rolling through support as well.

The DAX had been significantly weaker than the U.S. markets, but recently it’s found a decent number of buyers to push it higher. The technical outlook has become a bit murky, so for now we’ll run with how the U.S. plays out and go from there with other global markets. We also looked at the CAC and FTSE.

For more in-depth analysis, check out the Q2 Forecast for Global Equity Indices

The recent decline in US oil took it near the July slope we’ve been focused on as a major threshold. Stay above and the outlook is neutral at worst, bullish at best. Drop below, however, and we could see a large speculative unwind develop. UK oil has a similar ‘line-in-the-sand’ near 67 via a trend-line dating back to June. Likely to hold or break in-line with the July slope in the US contract.

Gold, range fades or do nothing until it breaks

Gold continues to test traders’ patience as the range which has dominated most this year’s trade so far continues. Price is bottled up between just above the 2013 trend-line and down near 1300. For now, a prudent approach is to look to resistance and support for range-fades upon reversals in momentum. Once the range breaks, then we’ll look for directional trades. It appears an upside breakout will eventually come, but until then it’s mere speculation. A weekly close above the 2013 trend-line would be our cue. 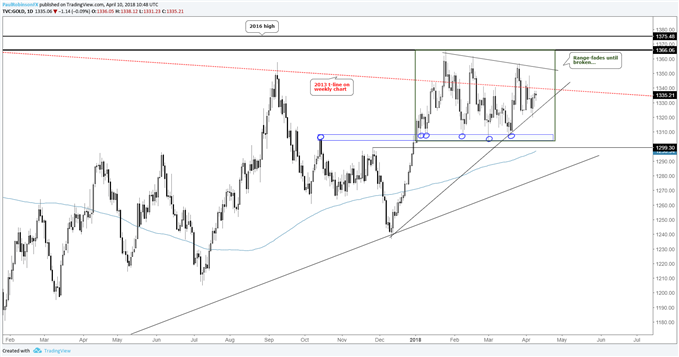