It is one of phrases I most dislike hearing from traders. Not because they display a preference for an alternative brand of analysis - technical, structural, or otherwise. Rather, because it is more often a consequence of frustration and misunderstanding. As most of us appreciate, what we see in the markets is the result of many different opinions and positions coinciding into a single view on prevailing value. Given that there is far greater wealth concentrated in central banks, sovereign wealth funds and large financial institutions who primarily use fundamentals versus the relatively small sliver of influence the chart-favoring speculative crowd represents; it should be clear that fundamental analysis dictates more action in the market. It is certainly true that a range of conflicting themes can muddle the picture, during which technicals can help facilitate reasonable entry and exit - though I don't buy into the belief that it can chart the subconscious of the confused masses. Yet, when a discernable fundamental event or theme seizes the majority's attention, it is easier to form and track a trend.

There is always a high profile fundamental item that skeptics can point to and say 'see, this doesn't move the markets'. Rule number one in fundamental analysis is to identify if something is important to the market - and what in particular is most important when the winds cross. US nonfarm payrolls and general 'risk trends' are held out to be market drivers that can override anything that may compete for our attention. However, NFPs can come exactly in line with expectations and sentiment may simply have plateaued with a luke-warm projection for the future. Neither is likely to dictate dramatic volatility or charged trend, but it doesn't mean the next jobs report or spark of panic/mania won't focus the market.

A good, current example of how this dynamic works is with the new rise of trade wars. There are many that would say there aren't trade wars or that they don't have a negative impact on the economy/market. That is usually an assessment made on political belief rather than market observation. There should be little doubt that the market currently appreciates that a series of retaliatory trade restrictions between the US, China and other countries will pose serious pain in the future. We have already seen a significant level of volatility with sharp market corrections result with rumors and reports of impending trade taxes. When President Trump signing a massive $60 billion tariff against China for claimed rampant intellectual property theft and the expiration of a grace period on blanket steel and aluminum tariffs, it is hard to miss the belligerence. What resulted was a wide tumble in risk assets with the S&P 500 posting its sharpest weekly drop in two years (second largest in six years) and the heaviest period of two month volatility (ATR) since 2008. 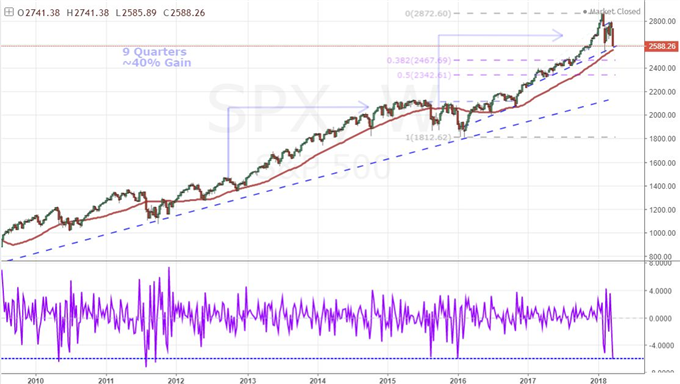 What About USD/CNH and EUR/USD

So, if we know that trade wars are important to the broader market and it is particularly acute between the US and China; why is it that the USD/CNH exchange rate refuses to move from its months-long range? There are a few reasons for that. It shouldn't be ignored that the offshore Yuan is not exactly a freely floating currency. Yet, even if it were, why would capital immediately shift in mass to one side or the other given that it is not yet clear what the escalation in retaliation will reach and with capital controls in place on the Chinese side? Who stands to lose the most economically - and political cheerleading is rarely good for returns. If risk trends truly drive, it will likely resolve USD/CNH lack of commitment; but not the standoff itself. The same logic applies to EUR/USD. Europe's exemption from the US metals' tariff is a relief for those fearful of a global trade war turning quickly into a crisis, but it doesn't resolve the benchmark currency pair's lack of direction. This removes an open-ended risk. It isn't a new benefit to either. With its absence, we return the same competing themes breading uncertainty in trend before the trade wars started to pick up in earnest. We discuss the importance and nature of fundamentals with trade wars in the backdrop in this weekend Quick Take Video. 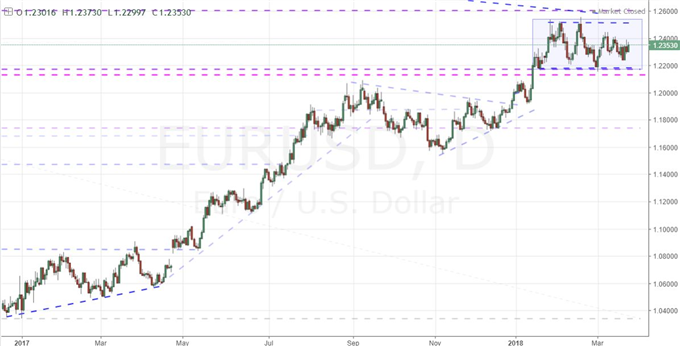 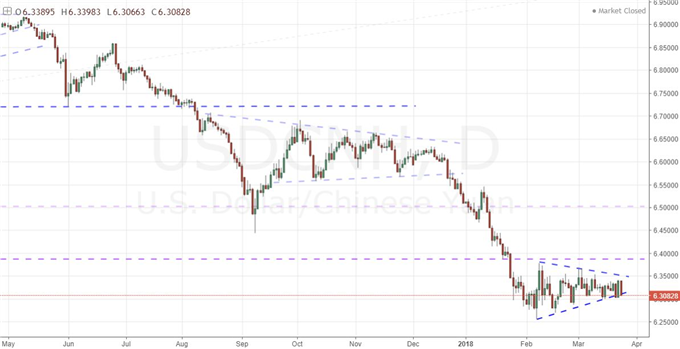