Trading Strategy: Can a Fed Hike and Threats of More Move the Dollar?

Do you have any Dollar exposure or intend to trade the currency after the Fed rate decision? Join me live as I cover the event, its impact and the trajectory for the market after the fact. Sign up on the DailyFX Webinar calendar.

One of the Most Important Fed Decisions in Years

There is little doubt that the Fed Reserve's rate decision Wednesday afternoon in Washington DC will be one of the most important in years. Yet, that doesn't mean it will be one of the most market moving. In fact, it will struggle to generate a significant commitment from the Dollar and US-based assets with a more pressing fundamental headwind to contend with. Before we can understand the exception the speculative rank will take, we need to understand why this will be an important policy meeting. According to the market, it is almost certain that the FOMC (Federal Open Market Committee) will hike its benchmark interest rate range 25 basis points to 1.50-1.75 percent. According to swaps, it is a 99 percent chance. Given the group's commitment to forward guidance and transparency to prevent imparting volatility on the financial system, there is little reason to doubt this outcome. Yet, if this is so heavily expected, then it is likely fully priced in. 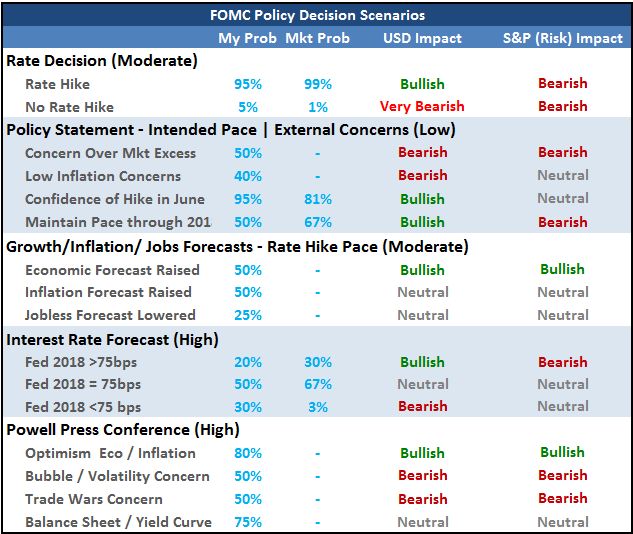 Still Dealing in the Details of Pace and Pilot

Just as with any other rate decision of recent years, the important aspects to this policy meeting are in the details. And there will be a lot of detail to find in this particular event. This is one of the 'quarterly' gatherings for the US central bank where they will not only issue their decision on their overall policy and a standard monetary policy statement, but they will also issue their forecasts (SEP - Summary of Economic Projections) and new Fed Chairman Jerome Powell will conduct his first press conference after leading his first meet. We have seen the market move from a material discount relative to the Fed's own forecasts for hikes to a premium. In other words, speculation of 4 hikes in 2018 has garnered significant traction - approximately a 30 percent probability according to swaps. As for Powell's first presser as the head of the central bank, we will either see a close enough copy of the frustrating line-walker that Yellen was or we will be surprised as he defines his offers his own opinion separate to the group. 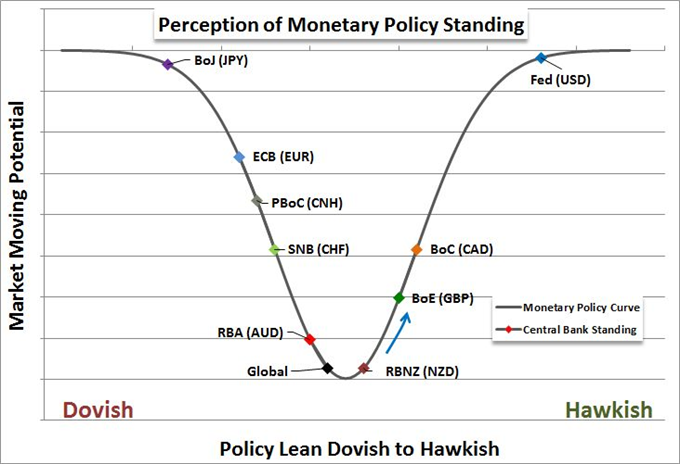 If we were looking for significant market movement from this Fed decision, the most severe reaction would be a hold on rates, rhetoric that casts into doubt any further hikes in 2018 and a divergence from Yellen with a progressively dovish central bank chair. Naturally, that would be bearish Dollar but it would also unnerve risk trends and assets like US equities - consider what investors would think of the central bank's panic such that they abandon their vows of transparency. Yet, even if this event falls close to the expectations, we are referring to a uniquely hawkish policy bearing that confers significant advantage to the Greenback and risk of deleveraging to US assets. That said, it is unlikely to secure genuine influence over the Dollar or US assets. There are themes of far greater influence, that are generally unaccounted for in current prices and will have updates soon after the Fed decision. Most prominently, we have trade wars which influences the world. The US is at the center of this effort and it supposedly will produce details of its tariffs victims on Friday - and perhaps news of a hefty China-specific tax as well. Even if we considered these equivalent market drivers, taking a trade on the earlier event is a very risky move. 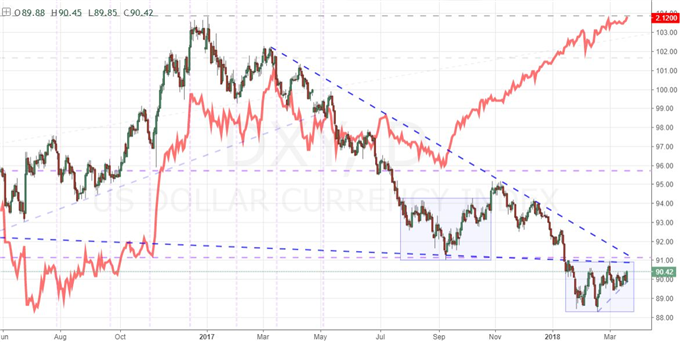 Heading into the Fed decision with a bias for how much impact is possible and which lean would garner the most run, it is important first to banish unrealistic expectations. Most prominent in my list are EUR/USD and USD/JPY. The former has carved out a range after a long run that is months in the making. Both 1.26 and 1.2150 are heavy technical levels, but a break is far less important than follow through - which is difficult to muster. The same is thereby true for USD/JPY which would require heavy lifting to make something meaningful of the inverse head-and-shoulders pattern it has carved out. More reasonable on the bullish side, there is USD/CHF and NZD/USD that is already leaning in favor of the Dollar, has cleared technicals and would only look for limited engagement. For bearish outcomes, the AUD/USD, USD/CAD and NZD/USD have all benefit an unexpectedly weaker performance from the commodity currencies than the already pained Dollar. Here again, we should measure in restricted reach and duration. We discuss the FOMC rate decision and the strategy around the event in today's Quick Take Strategy Video.