Every day, it seems that there is little chance that we can further escalate the tension in the as-yet 'cold' trade war. And yet, I find myself repeatedly and unpleasantly surprised. This past session, drums of trade wars grew even louder as the conditions surrounding the event further deteriorated. The announcement of chief economic advisor Gary Cohn's resignation late Tuesday is an ominous sign. Not surprisingly, his exit was reportedly over differing views with the President over the drive towards trade wars. This not only removes a voice of moderation, it is a significant loss of council on economic conditions and policy for Donald Trump. In these terms, it is more likely that aggressive policy is more likely to be favored by an under-informed President or with the more isolated support of Commerce Secretary Wilbur Ross. Preparation for retaliation is also further taking shape. The EU Trade Commissioner filled in some details about the list of American imports that it was preparing for tax which would amount to an estimated 2.83 billion euros, and she said they said they were planning a WTO complaint as well as coordination with other US trade partners. Meanwhile, the White House seems to have penciled in a signing ceremony for the tariffs at 3:30 PM local (8:30 PM GMT).

The Dollar's Position in this Risk

The implications for risk trends are relatively straightforward in this protectionist maneuvering. The threat of curbed economic support through trade and investment flows for both the US and its trade partners is certain. We have seen a market act oblivious to such risks numerous times in the past, but this rising tide would be difficult to miss. Complacency is only a viable option when there is no material loss that speculative interests can offset. This is not one of those times where artificial balance can maintain stability. As for the Dollar, the path of influence this event takes is not so clear. While the economic and investment blowback will be felt in the US, FX is a relative value market. There is a good chance that the Euro, Pound and Yen are hurt as much - if not more than - the Greenback. That could offset and balance out a prominent trend. The true risk is a long-term loss of reserve status, but will that become apparent to the masses especially before a full scale risk aversion sweeps through the market which would return the currency to its safe haven status. As we await the bearing, we had trade data report the widest deficit in a decade this past session and Fed's Bostic warned on the trade risks - even as the Biege Book reported wage growth. NFPs on Friday will be interesting as it will register whether rate expectations can exert influence.

In the assessment of who stands to lose the most in a US-led trade war, there are strong arguments to be made for the United States itself or Canada as its largest trade partner. However, the European Union seems to be vying for that position. The region's leaders have been quick to warn of retaliation - as suggested above - and in turn, President Trump has been quick to target the economy for subsequent retaliation with threats to imports of European autos which are a far more significant industry for trade and GDP. While Euro traders should keep an eye on this risk as it plays out, there is a more pressing and black-and-white event ahead: the ECB rate decision. While the central bank is very unlikely to change any actual policy, its rhetoric is open to revision. The European authority has made a concerted effort to try to curb speculation of a hike that has led to the Euro's rally. Will they notch up their effort - perhaps with trade wars as a backdrop? 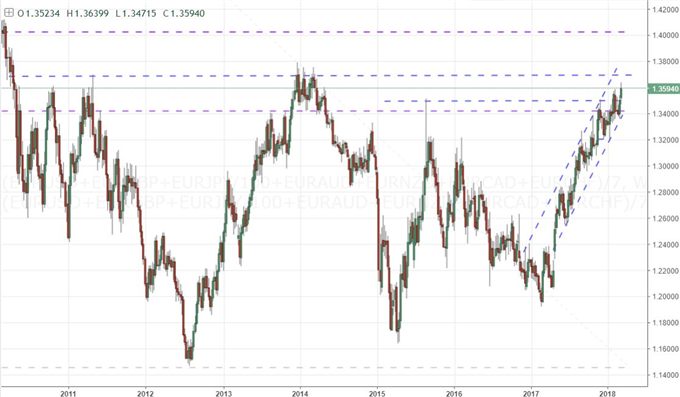 Other Fundamental Events and Themes

While tariffs and the ECB decision are top fundamental considerations for the immediate future, there is other event risk that global and FX traders should keep tabs on. The Bank of Japan rate decision is due Friday morning in Tokyo, but it will have the same likely outcome as the Bank of Canada this past session - no change to actual policy but adjustment to rhetoric likely reflecting the tension in trade. The Canadian Dollar's recovery was clearly cancelled, but there are still options for the Loonie and the Yen ahead. As a theme, trade figures are due for China, the UK, Germany, Australian and Japan. The US trade figures this past session offered up the largest deficit in 10 years. That will only add fuel to the fire in the dive towards trade war actions. And of course, we can't forget about the US and Canadian jobs report due just over the horizon on Friday - a distraction that will pull our expectations of volatility further forward. We discuss all of this in today's Trading Video. 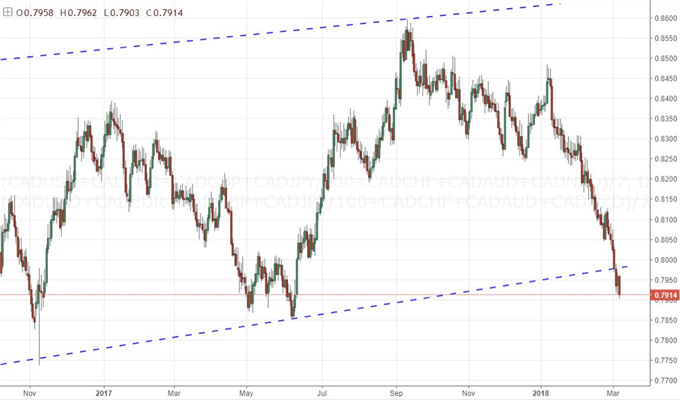