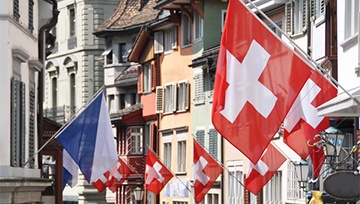 Swiss Franc Is Not Traders' First Option - And That's Good

Few traders would offer the Swiss Franc or any of its various crosses as one of the top currencies/pairs to review on a daily basis for trading. That makes sense as it has been less in command of its own direction and intensity than most other majors. After the SNB's epic monetary policy failure back in January 2015, there haven't been many local fundamental themes or events that have generated material response from the currency for more than a short period and small price response. Instead, we look to the Dollar with its fundamentally confounding weakness, the Euro as it deals with aggressive rate speculation or the British Pound with Brexit offering unusual winds. Yet, as motivated as each of these more liquid currencies is, their motivation and progress are notoriously conflicted. That makes for difficult trading. 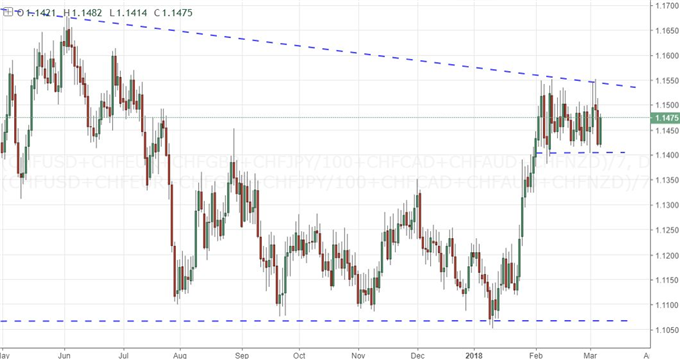 A Perfect Foil for Action

If we are looking to take advantage of a major event risk - say the ECB rate decision on Thursday or NFPs on Friday - what is the ideal counterpart to express a trade? Of course, the Euro is the most direct rate to the monetary policy decision and Greenback in the direct path of volatility for the labor statistic. Yet, what is the pair you chose in speculating an outcome before the release or even riding the volatility/momentum after it crosses the wires? If liquidity were our guide, we would go with EUR/USD, but that should highlight an issue. If we selected this benchmark pair, a trade after the ECB rate decision would expose us to a possible conflict should NFPs leverage a strong market response to the opposite direction. The Dollar, Euro, Pound and Yen are the most liquid currencies; but they are all loaded with their own heavy fundamental themes that are not quite clear on influence (tariffs, rate speculation, Brexit and risk trends respectively). From the Swiss Franc, we have a relatively neutral currency. It can confirm to where a major counterpart drives it - say USD/CHF. Absent cross winds, it does have its own innate technical drift, but it is not an encumbrance to motivation. 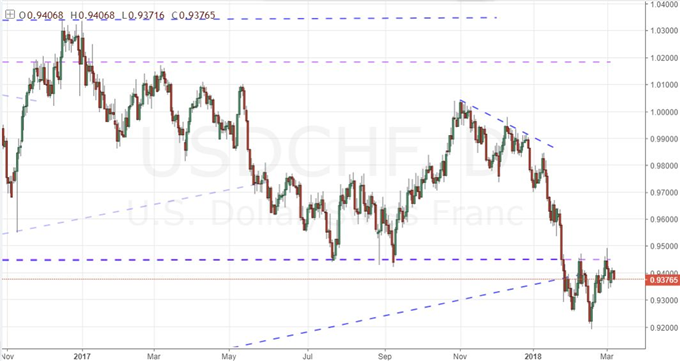 Where I'm Looking Among the Swiss Pairs

The idea to trading is to reduce the number of possible variables in analysis that can create uncertainty in the outlook and conflict in the market impact. The fewer the considerations, the easier it is to project catalyst and outcomes which in turn means there are fewer possible paths to choose a trade from. We still want motivation and technicals to work with, just not so much that it creates a wide spectrum of too many paths to choose and thereby little conviction barring a definitive and overpowering outcome for a particular event risk. With that said, USD/CHF is appealing. It has the conflict of the uncertainty in tariffs versus the definitive outcome fo NFPs ahead, but nevertheless, that is more workable than a EUR/USD path. CHF/JPY has seen a one sided move lower and is significantly charged should risk trends rebound. I'm also particularly partial to CAD/CHF. The Loonie has been driven lower by clear fundamental pressure, but should the BoC come out better than expected, it could issue a significant rebound even amid trade wars. We focus in on the Swiss Franc for trading in today's Quick Take Video. 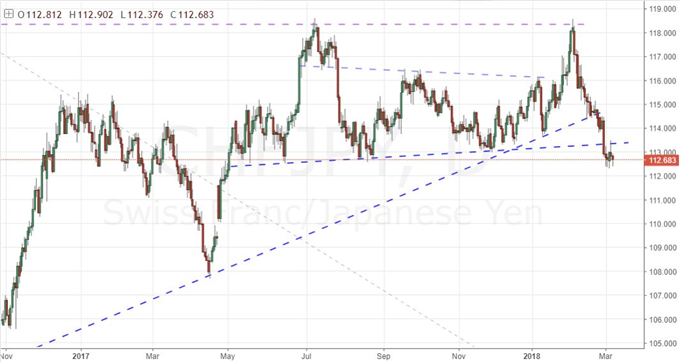