Gold Appeal is Growing as Trade and Currency Wars Materialize

See how retail traders are positioning in Gold relative to indices and other major currencies as volatility picks up alongside concerns of financial stability on the DailyFX Sentiment page.

US Move Relentlessly Towards Trade Tariffs

We have seen a relatively consistent protectionist agenda from the Trump administration since the President took office. Yet, until recently the 'America First' commitment has avoided seriously unsettling the market. Over the past few weeks, the effort has shifted away from withdrawing from trade groups which the US was not yet committed to (the TPP) or renegotiating advantageous arrangements with partners that have little leverage (NAFTA). Now, we are seeing more targeted and aggressive moves. Threats of action to counter perceived ill-gotten trade advantages for China have were made early last year. The steps towards action really picked up two weeks ago when the US Commerce Department announced released the findings from its investigation into trade and offered a range of recommended responses that were all remarkably aggressive. This past Friday, reports quoting unnamed sources suggested the President Trump favored the most aggressive suggestion from the Commerce Department. Then, this past session, he would state outright that he would announce the details of his actions next week.

The Contents of the Tariff and Why It Hurts

While the details of the new restrictive policy are not yet known, the market and media have leading expectations. The supposed plan is to introduce a universal tax of 25 percent on all imported steel and 10 percent tariff on all aluminum. While China has been at the center of most of this administration's reasoning for retaliation, this route will impact far more countries. In fact, the largest net exporter of steel and aluminum to the United States is Canada (already struggling with its trade relations through the NAFTA discussions). If the agenda were kept to a response to China, the implications would be significant but the spread to the global economy and financial system not definitive. In launching this economic volley against so many, it is a virtual certainty that one - and likely many - will retaliate. Trade wars are a destructive race to the bottom which benefits no country involved and certainly reaches many more that aren't. Add to that the fact that these markets are aggressively overpriced relative to traditional valuations through complacency and monetary policy, and a shock like this poses a very serious threat. 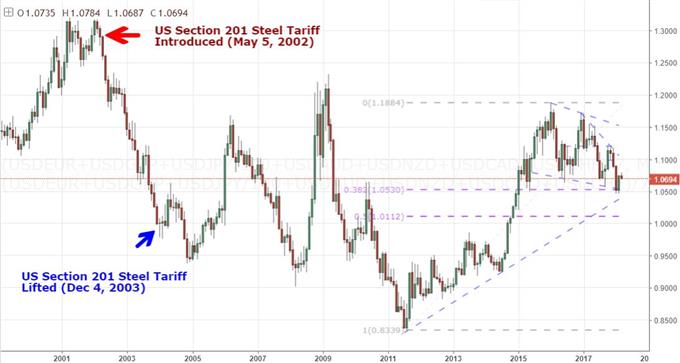 Where are the Havens

With the threat of risk aversion and global capital restrictions, the question to naturally follow is: "where should I look to move for safety?" Among the top rung of havens is the US Dollar and Treasuries. Yet, there is a problem in this traditional formula. The United States is the origination of this pressure. Furthermore, the benchmark currency has the most to lose. It is the most heavily used mode of exchange by far which has led to considerable capital circulating into the country seeking investment. If the US makes a move towards isolation, capital naturally diverts away from the country and there is a permanent devaluation in turn. When seeking out alternatives amid the possibility of rising risk aversion, we have to considering the growing concerns reflected in the currencies of other major economic players: the Euro looks at risk from the return of political stability and the ECB's verbal threats, the Yen is constantly buffeted by the most aggressive stimulus effort among the developed economies, and the Pound is on ever shifting ground with Brexit. What is an alternative to the four most liquid currencies in the world? 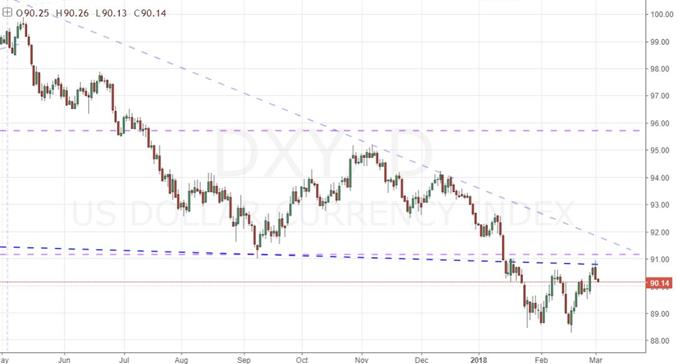 Gold is a Unique Harbor

We saw what risk aversion blended with a uniform devaluation of the world's top 'fiat' assets could do for gold following the last financial crisis. In 2008, the global financial system was coming apart at the seems and the largest central banks responded by massively increasing monetary policy by cutting benchmark rates towards zero and introducing large stimulus programs. Given there was no major liquidity outlet for capital to move while seeking safety and stability, investors reverted to their ancient solution: go to gold. In 2008 to 2011, the precious metal soared to the record high that still stands to this day - nearly $600 higher than the current spot rate. Is this one of the few markets of genuine last resort or is this time different? We take a closer look at gold in today's Quick Take video. 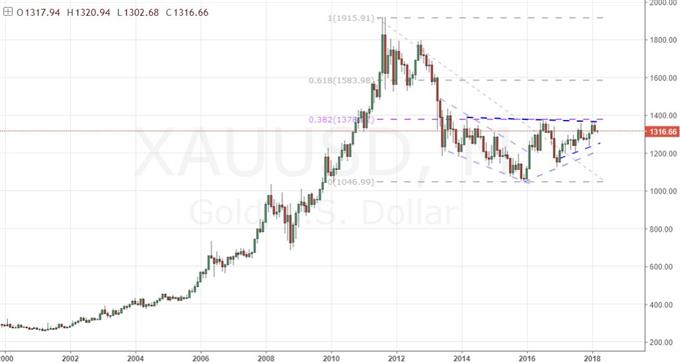