U.S. equity indices appear to have put in a low for now, while other global indices could make another lower low before a more meaningful bounce develops. Crude oil looks at risk of another leg lower, while precious metals have resistance just ahead.

The S&P 500 put in a large key reversal bar at the 200-day on Friday, which hints at a sustainable low for the foreseeable future. In the short-term, price action could be volatile as the market sorts itself out after such a sharp plunge. As long as Friday’s spike-day low at 2532 holds, the overall outlook is neutral to positive. It'll be a two-way market for now, most likely. 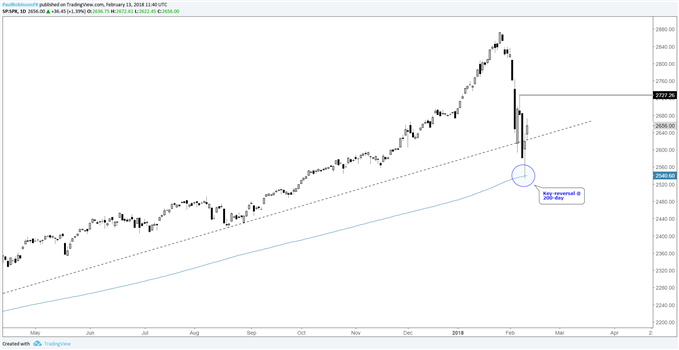 Other global indices, namely the DAX, CAC & Nikkei, could make lower lows. As long as we don’t see the reversal in the S&P 500 get erased and hold a higher low at least, then other global indices making one more decline could be a healthy event given support not far below.

Both the DAX and Nikkei have support not far down which may provide a stronger backdrop for bounces. Support in the German benchmark arrives in the vicinity of 11935/868, while for the Japanese index there is a trio of support in approximation to one another. The 2015 high, 200-day, and trend-line from last year arrive between 21000 and 20750. It would be a good area to see the Nikkei hold. 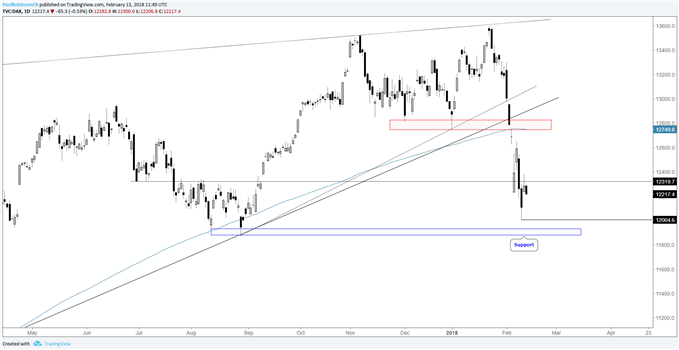 As far as the FTSE is concerned, a lower low would mean a solid break of the 7100 support level extending back to October 2016. This could lead to an extended decline if it doesn’t hold.

US crude oil not finding much support at July slope, UK oil below trend-line

The break in US crude oil has it sitting on an important slope dating back to July, which so far isn’t bringing much buying interest. Should it continue to fail to gain a bid, look for it to fail and lead to a decline down to the 56/55-area.

On Friday, UK oil broke a trend-line dating back to June, bringing horizontal support around 61 into play, and on a break of 61 the next level up is around 59.50.

Is volatility shaking your confidence? Check out this guide, Building Confidence in Trading. 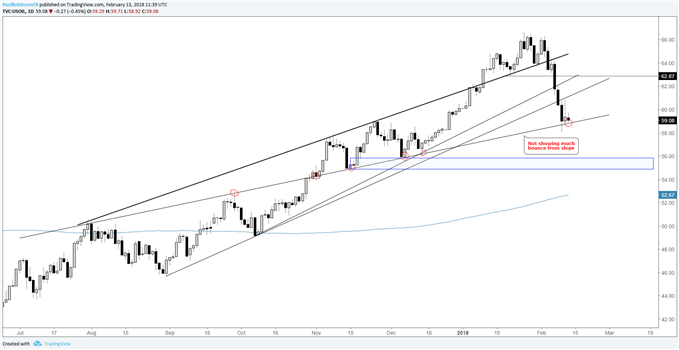 Precious metals bouncing, but gold has a big long-term trend-line as resistance

The outlook in precious metals is becoming increasingly murky with choppy trading dominating price action, however; one thing is pretty clear right now from a big-picture standpoint. As long as gold stays below the 2013 trend-line the outlook is neutral to bearish. For now, rallies into the 1340/50s are vulnerable to reversals. 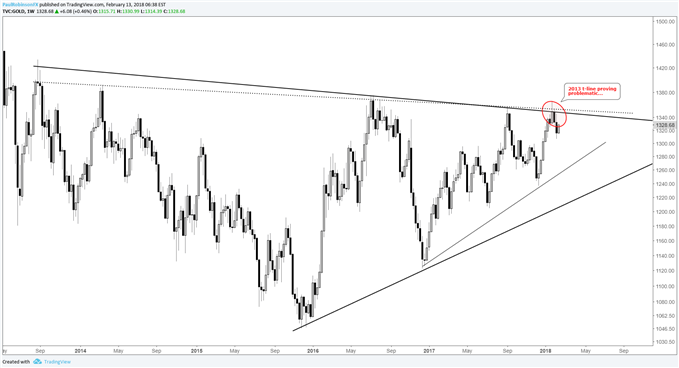