EUR/USD Reversal May Ultimately Be the Product of Risk Trends

•Market participants are not interested in anemic yields, but eagerly speculate on eventual course corrections in the future

•The Euro gained dramatically in 2017 with a distant forecast of an ECB hike, but risk aversion makes that particularly indulgent

The Warm Complacency of Risk Has Been Shaken

While EUR/USD has not quite epitomized the persistance reflected in US indices over the last nine years, its climb over the past year is undoubtedly remarkable. It is not just the scale of the move in an otherwise mixed FX market through the past year but also its defiance of traditional fundamentals. The broad climb in speculative assets from the Great Financial Crisis has come to be known as 'the most hated' rally in history in just the past year. That is largely due to the growing skepticism over the lackluster measures of growth, real returns and forward value which seem to be supplaneted by a limitless speculative appetite. Eventually, however, the markets will revert to traditional measures of value - particularly when participants are shaken by volatility. A heavy squawl has hit the markets and traders are looking beyond the vaneer of quiet day-to-day returns to truly evaluate their exposure and risk.

Where The EUR/USD Fits in on the 'Risk Spectrum'

Historically, the EUR/USD has not presented a strong connection to the standard ebb and flow in risk trends. It's immense liquidity, the representation of the two largest economies in the world and the currencies' respective credit quality rarely reflects a distinct 'risk' asset to inspire the 'haven' status. In other words, they are generally both havens. However, that hasn't always been the case. The European debt crisis between the end of 2009 and 2012 turned the Euro into a focal point of investor concern and offered a clear foil to the extreme liquidity prized in the US via Treasuries and money markets. There have also been instances in the past where the intensity of general risk aversion was so severe that global investors reverted to a blind fight to absolute 'quality' which finds US Treasuries with no rival. That was the case through the peak of the GFC in late 2009. 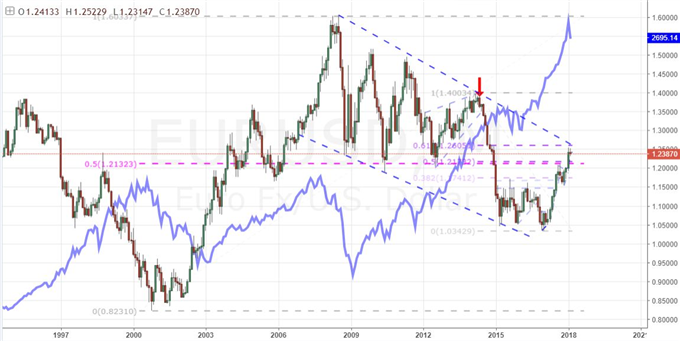 Over the past year, the motivation for EUR/USD direction and pace has settled to traditional growth comparisons, assessment of political stability and monetary policy between the two countries. Economic activity between the two is comparable in its moderate pacing. Political risk is certainly skewed in favor of Europe which avoided the populism shift that was looming through a range of elections over the past years. The US in the meantime has seen the Trump administration move ahead full steam with an 'America First' agenda that reflects isolationism that pulls it back from speculative rotation. That said, the 2,000 pip rally from the pair the past year more than accounts for that discrepency. It is the monetary policy consideration that is truly exacerbated. Despite the Fed's pursuit of five hikes already and anticipation of 3 more quarter percent moves this year, the ECB's exceptional accomodation has not curbed traders appetite for leveraging a perceived value for the Euro to position ahead of an eventual policy reversal. It led to a remarkable Dollar rally, so why not the Euro? 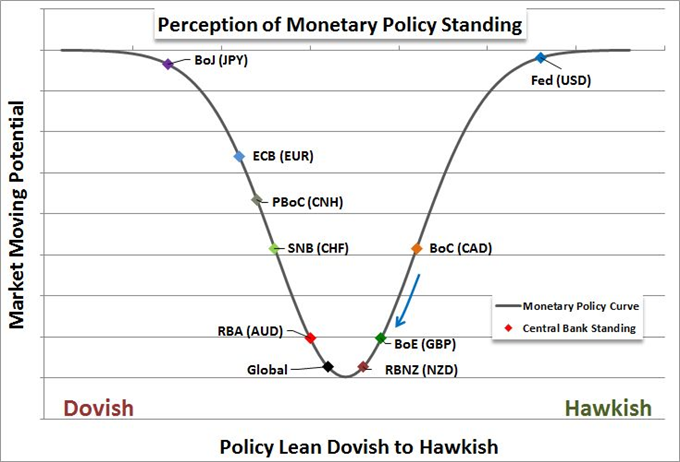 The markets started genuinely speculating on the possibility that the Europen Central Bank would cap its QE program and start to hike rates last year. The group's President Mario Draghi even seemed to seed the notion at different points to see how the market would react, but he didn't like the exchange and yield response that resulted and consistently backed off. Despite the extention of the stimulus effort and the regular delays to market forecasts for hikes, the Euro held onto its gains as general complacency reinforced the 'easy trade'. Yet, complacency is extremely important for this trend to work. Forecasting rate hikes more than a year away for front running now is extremely presumptuous that no other troubles befall the market and send the reeling. Risk aversion has certainly shuddered and the threat of a lasting retreat in speculative excess is greater now than at any point in the past seven years. If fear continues to weigh over-inflated markets, how will a currency whose value is based on anticipation of capital flowing in for a first rate hike 12 months away fair against a reknowned - and recently depreciated - absolute haven? We discuss the EUR/USD in risk aversion in today's Quick Take video. 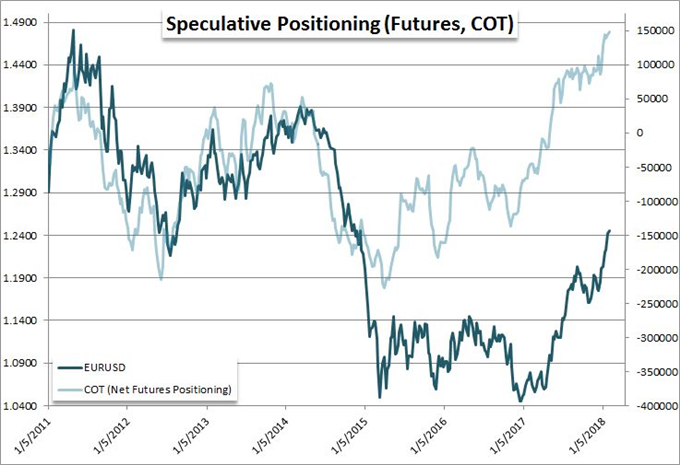