Elliott Wave Webinar: USD Index May Need to Hold Its Breath Once More

The weakness in USD Index may have one more dip coming when analyzing through Elliott Wave Theory. After this dip, USD Index may stage its largest rally since January 2017.

The video above is a recording of a US Opening Bell webinar from February 5, 2018.

In today’s US Opening Bell webinar, we discussed key markets using Elliott Wave Theory such as (and not in this order) DXY, EUR/USD, USD/JPY, GBP/USD, AUD/USD, NZD/USD, Oil and Gold.

The US Dollar Index (DXY) is consolidating sideways in fourth wave of an Elliott Wave impulse wave. This sideways consolidation could be an Elliott Wave triangle pattern. When wave (iv) finishes, that means we will anticipate a fifth and final wave to new lows. We believe this last push into new lows may set the stage for the largest US Dollar Index rally since January 2017. 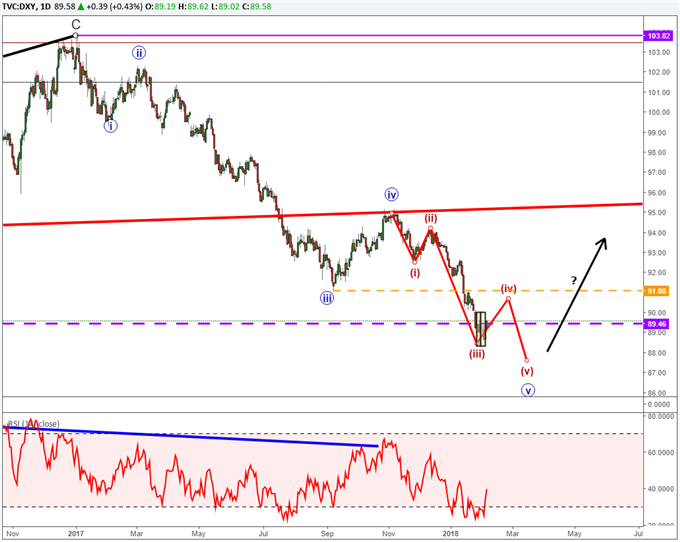 Applying the Elliott Wave principle to the chart above, we can see a sideways consolidation in wave (iv) that may carry further this week. Fifth wave measurements stretch down to 87.40 so we will look for signs of a reversal should DXY make it that low. Once the fifth wave is in place, we anticipate a rally back up towards 95-98 that reflects the largest rally since January 2017.

The mirror opposite is taking hold within EUR/USD. EURUSD has recently pressed new highs. It appears to us that wave (iii) within circle wave ‘v’ was extended as wave (iii) was 2.618 times the length of (i). 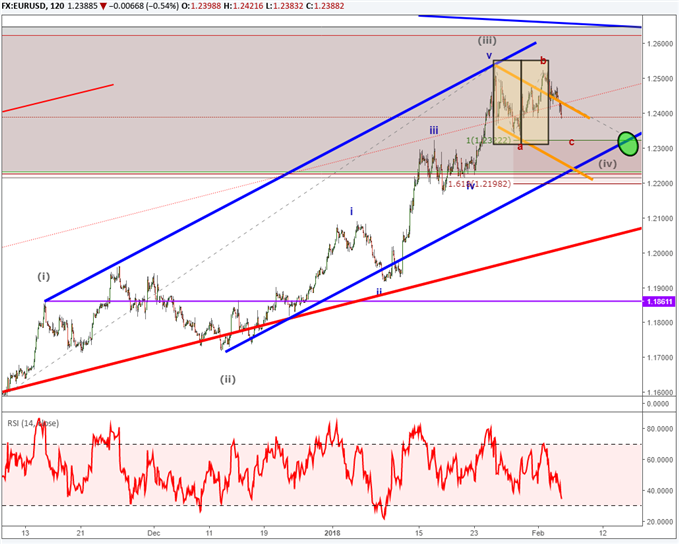 If indeed EUR/USD has just finished the third wave of an Elliott Wave impulse pattern, then the fourth wave is currently underway. After a little more sideways consolidation, we are anticipating another run towards the 1.25-1.26 highs. The final high in wave (v) would finish a three year long Elliott Wave expanded flat pattern on EUR/USD.