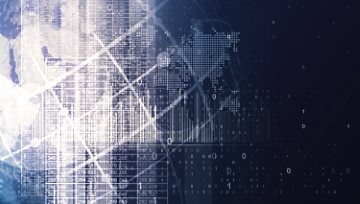 Precious metals are sitting below resistance and remain neutral at best as long as they stay under; silver is putting in a bearish formation. Copper is breaking support. Crude oil is holding slope support. Global indices remain strong.

Last week, gold was rejected from the 2013 trend-line, and is currently trying to work its way back towards this line of resistance. As long as it stays below, the outlook is neutral at best and could possibly turn bearish. A breakout above 1345 turns the picture positive.

Silver has better clarity at this time, at least it will if the bearish ‘head-and-shoulders’ pattern it’s currently building comes to fruition. It’s a tantalizing prospect given it is forming beneath resistance. Price action the possible right shoulder is weak, marked by several failed rallies in recent sessions. Conservatively, a break below 16.80 is needed before running with the prospects of lower prices. 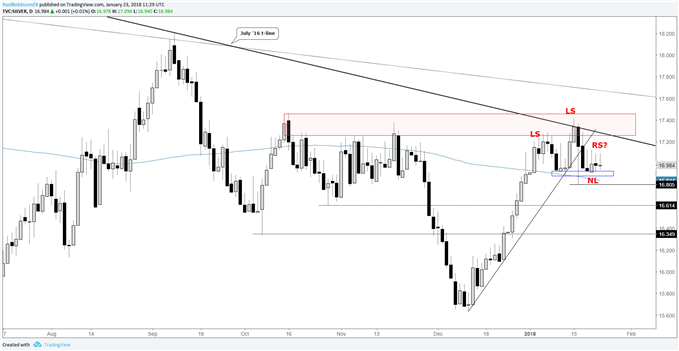 Copper is facing the prospects of breaking down below important support, should we see today’s daily closing print take shape below 3.17. There aren’t any notable levels of support for a good distance lower, and so as long as it stays below support now turned resistance, the trading bias is bearish.

WTI crude oil has a solid line of support by way of the July slope. Friday was the first test of it since breaking out above, and it has held well thus far with yesterday seeing buyers step in. As long as it holds along with the Friday low at 62.87, the trend remains well intact. A break below will be seen as reason o expect a larger decline. Brent crude has a trend-line from December it is leaning on right now for support, with 68.31 as price support.

Struggling with confidence? You’re not alone. Check out this guide, Building Confidence in Trading. 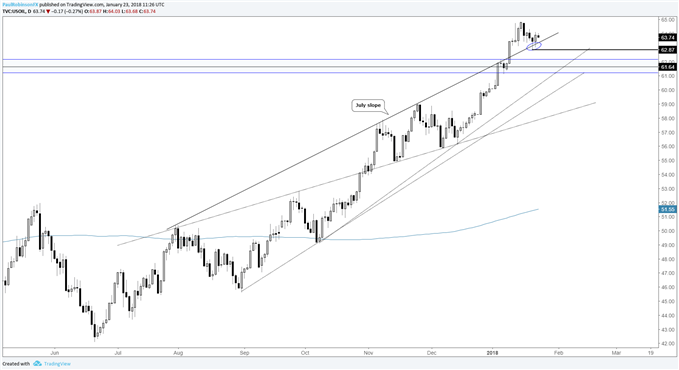 The U.S. indices appear to be in a ‘blow-off’ stage which will eventually lead to a significant top on a macro-scale. But from where and when, are questions we’ll let the market sort out. From a shorter-term trading standpoint, at the moment risk/reward isn’t particular favorable for the S&P 500, Dow, and NDX.

The FTSE has undergone a constructive pullback and is neutral to bullish in the near-term above 7683. The DAX broke out to a new record high this morning, but has a top-side trend-line running over from 2015 to contend with. For more details, see this morning’s DAX commentary. Same goes for the CAC, which has a pair of trend-lines it gapped into this morning and is failing from. 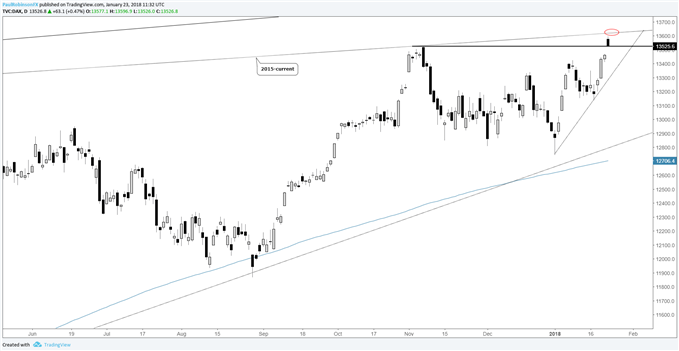