The euro looks poised to head higher, but still needs to cross above the 2017 high. Euro and Yen cross-rates have intriguing set-ups, with the former looking bearish heading and the latter moving higher in the days ahead.

EUR/USD is treading water around the 2017 high which marked a top before an extended correction into late last year. The peak arrived at the 2012 low, and will need to be overcome before higher prices can be expected. Broadly speaking, if we see a breakout the next major line of resistance arrives at a trend-line off the 2008 high in the vicinity of 12500. 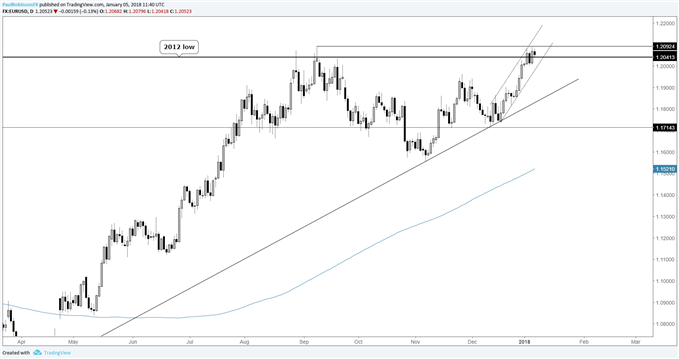 The euro cross-rates on the other hand are positioned bearishly in the near-term. EUR/AUD, in particular, is high up on the conviction list with it having failed below the February trend-line, for starters. It is also currently capped by a trend-line off the December high. The resulting price action in recent sessions is creating a triangle, which looks likely to break in-line with the month-long trend lower. EUR/NZD is positioned similarly, for obvious reasons, and is at risk of breaking below 16800, 16760, towards 16600. EUR/CAD is trading on a trend-line back to September, but if we see this line of support give-way then we could soon see a trip to 14925 down into the 14800s. 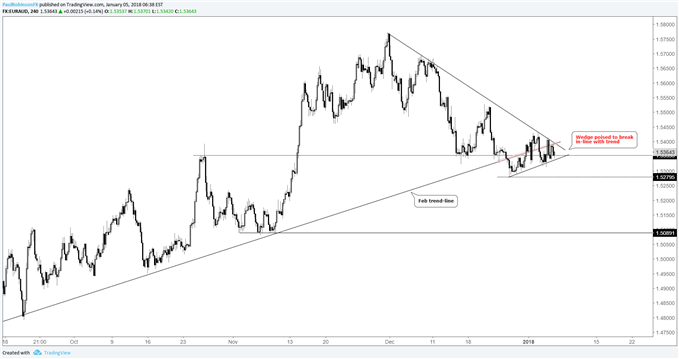 USD/JPY is posting a triangle formation, with especial interest coming to this pattern due to the fact the top-side trend-line of the pattern is a long-term trend-line as well. The line extending down since August 2015 has received much play in recent weeks, increasing its importance. We’ll need to see a breakout take shape before we can run with it, but it should lead to a sizable move of around 300 pips or better based on the height of the wedge. EUR/JPY is trading well outside of a 3-month-long range which concluded at the end of last month. It is looking to further itself along in the near-term into the 13700s, but potential for a much larger move is there as JPY-pairs can garner momentum quickly. GBP/JPY is looking to break above congestion in place since September. The targeted objective at this time is for a full-reversal of the downdraft resulting from the ‘Brexit’ vote; 15770 would complete the full turn. 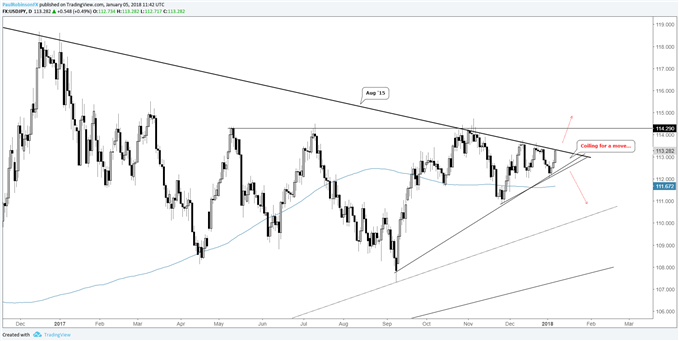 We also did a preview of today’s U.S. jobs report as well. It appears likely a big miss will be more impactful on markets than a big beat given the expectation for the Fed to raise rates again in the months ahead. Overall, though, a reactionary stance to price action will be taken on this end. Other markets we took a peek at were gold & silver, crude oil, and the DAX.