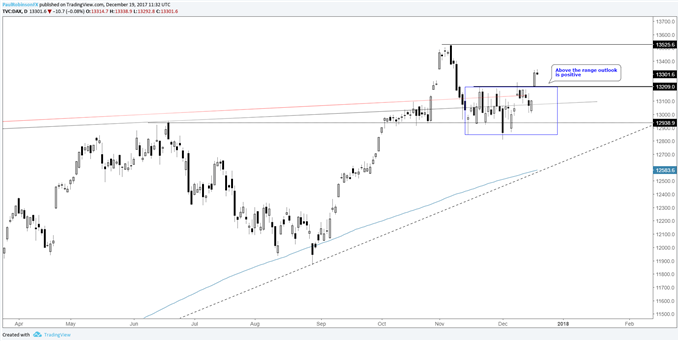 The DAX broke out of the month-long range yesterday, putting focus on the record high. The S&P 500 continues to be quite strong, bid expected to hold until year-end. Gold & silver are currently facing resistance, while crude oil holds strong support.

The DAX finally broke free from the trading range it had been stuck in for a month. As long as the breakout holds above 13200, then the path of least resistance suggests we could soon see the record high at 13525 or better. A decline back in the range puts a pause on this notion. Keeping an eye on the CAC 5442 level, as a breakout above there gets it out of the trading range and brings 5536 into view. This would also bolster the case for the leading DAX. The FTSE is pushing hard into overhead resistance in the 7550/600 vicinity. It looks likely to breakout to new record highs, but not favored for entries at this juncture due to its extension into a strong wall of resistance. The S&P 500 broke above a top-side trend-line back to April 2016, looks likely to remain firm through year-end. Support clocks in around 2675/65 on a pullback.

Gold is bouncing into resistance in the 1260s. It remains in a broader downtrend, but with a short-term positive trend structure. From a tactical standpoint, a break of the trend-line off the recent low (most easily seen on the hourly time-frame) is seen as shifting focus back to the downside. Price may wedge up first, and then break. It could come to the top-side and take gold into higher resistance levels, so again, focus for shorts remains on the rising trend-line. Silver is testing an important area of resistance around the 16.15 mark, and like gold has a trend-line that if broken may kick off another leg lower. 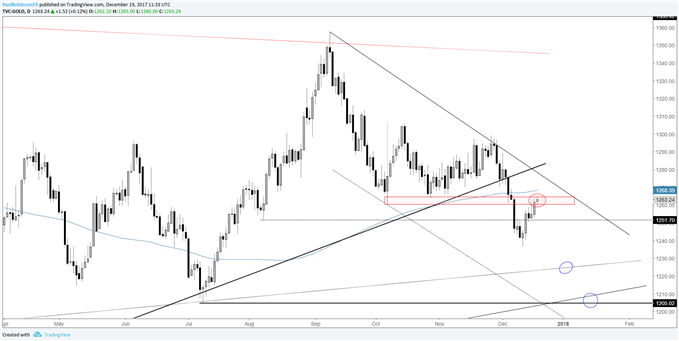 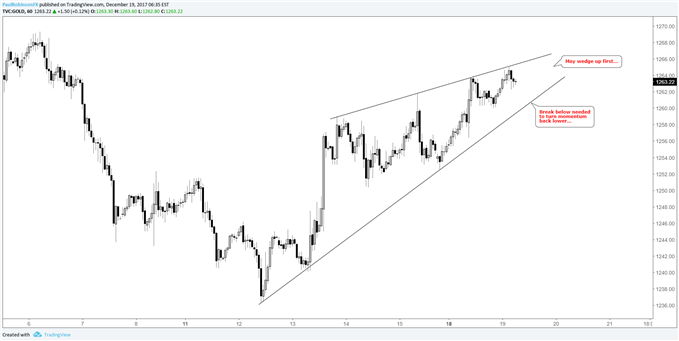 US crude oil continues to make good on a slope extending higher since summer. It’s first test of this line last month wasn’t viewed as all that significant, but since it has held it now on two occasions since, the line is growing increasingly important. Stay above, then the trend of higher-highs, higher-lows remains intact. Drop below and we could see a decent amount of selling develop. Speculative longs in the futures market continue to grow further into record territory. If oil starts to breakdown there are plenty of longs to liquidate and push it lower. 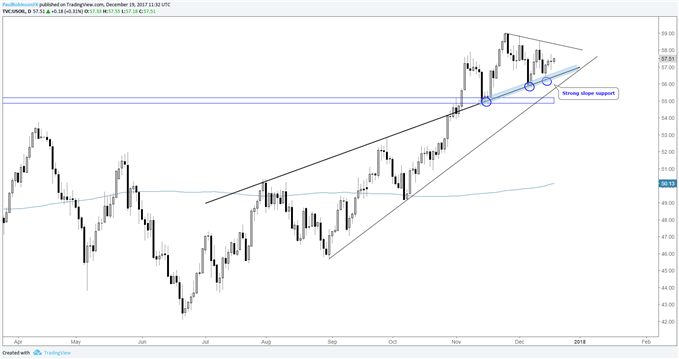