The slide from the Greenback following a closely watched Fed rate hike has stumped the unprepared. However, this outcome shouldn't surprise nor should it turn traders off. In fact, this outcome for the Dollar establishes more realistic and favorable trading conditions.

Breakouts and trends are extremely uncommon in current market conditions. Standard are measured ranges with draw nearer targets and stops for traders. But that is exactly the conditions best suited to retail traders. See how these traders are positioning on pairs like USD/CAD and AUD/USD on the DailyFX Sentiment page.

Many traders were dumbfounded by the Dollar's reaction to the Federal Reserve decision this past session. The central bank announced a rate hike and further maintained a forecast for another three hikes into 2018. There is no other major group that has even projected a certainty of a hike moving forward. Despite this, the US currency would still sink through the session. It is true that the rudimentary equation is: a rate hike or QE drawdown equals a currency rise while a rate cut or QE increase translates into a currency fall. Yet, markets are not so linear. In a world where speculation is prevalent, there is context that needs to be accounted for as it materially alters the focus and response with major event risk.

Looking at swaps and Fed Fund futures heading into the event, it was clear the markets had fully priced in the rate hike that was realized. They were also projecting some degree of further tightening into 2018 - though not the full trio the Fed had laid out. In other words, the 7 day rally that the Greenback forged in the lead up to the event was the value the policy change was worth. It was 'baked in'. The retreat is the natural profit taking that occurs when a persistent move eases up when there is little expectation that the trend can be extended further. This is the 'buy the rumor, sell the news' scenario. Yet, this development shouldn't disappoint us or turn off our interest in trades among the majors. I would argue that this is a development that should stoke our interest and conviction in trade opportunities. Without this major event risk and its uncertain impact hanging over our heads, we can now focus on natural market currents and the broader market pace.

Generally speaking, markets are far more conducive to ranges than they are to major breakouts or strong trend reversal/continuation. There may be some modest grade to congestion (channels), but it is still congestion prone. That is the pace of the financial system and in that we find more viable opportunities - why would we try to pick out four leaf clovers in a field of so many three leafed weeds. Now that we have lifted this veil of uncertainty, we can measure our ranges and moves that are far more capable of hitting reasonable targets around technicals rather than carry uncertainty in event risk. A technical pattern like USD/CAD's range is far more appropriate in these conditions. Even USD/JPY's range which is wider is more appealing given the circumstances - and some risk spillover may even contribute to some measure of momentum. But if we were dead set in looking for more productive moves, we also have AUD/USD. It is similar to NZD/USD in its fundamental motivations and technical reversal into a wide range, but it hasn't made that critical break yet. We talk about the appealing traits of the Dollar for trading post-Fed in today's Quick Take Video. 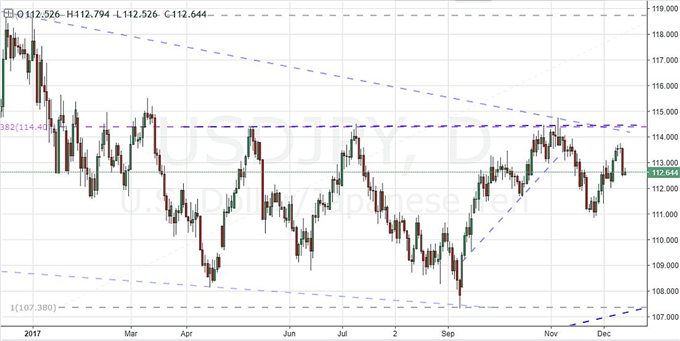