Drawn In By a High Profile NZD/USD Reversal Pattern

The New Zealand Dollar charged higher this past session leading to the setup of key patterns like the NZD/USD's inverse head and shoulders and other crosses that actually broke. How much opportunity is in this staging?

Speculative futures traders have driven an extreme swing in Kiwi positioning to an over-extended net short position. See how retail FX traders are exposed in NZD/USD on the DailyFX Sentiment page. . Is it a signal or contrarian signal?

I am just as drawn in by tempting technical patterns as the next trader. NZD/USD is offering up one of the most distinct formations that I have seen in some time. And, in a sea of unproductive and uninspiring charts, the inverse head-and-shoulders pattern cued up by the pair looks like a mirage. Like a flashing light, technicals do draw my attention initially; but I try to make it a point to run such initially appealing setups through the full gauntlet of analysis. I find that the failure point for most of my stopped trades is not in the market's unexpected fluctuation (where it should be) but rather in an underperformed analysis that covers the full spectrum of technical, fundamental and conditions analysis. I intend to evaluate the Kiwi as completely as it deserves.

In my prefer comprehensive analysis approach, I have to find enough of a balanced motivation and staging to overcome any competing force that would keep the market under wraps. In the case of NZD/USD and most markets, the primary issue to deal with are general market conditions. The high profile moves in mature trend extension, full blown reversals or breakouts with follow through all struggle with the reality that such situations are rare in these markets. Thin liquidity and thinner volatility provides little platform for the kind of seismic shift that needs to occur to facilitate such moves. So, technicals in this case does not provide enough of the heavy lifting. Sure, the NZD/USD has carved out an exceptionally clear inverse head-and-shoulders pattern (a reversal setup); and it fits into a broader range over the past 18-24 months. But, that is not enough to provide a consistent lift.

To manage a meaningful move where a bullish break can do the lifting necessary to carry a purposeful and profitable, multi-hundred pip follow through on a breakout, we would need fundamental motivation. That is a problem. The Kiwi's rally this past session was the lever that managed the move to the 'neckline' on the aforementioned pattern. That was triggered by discrete news that the RBNZ will be headed as of March by Adrian Orr, the current head of the NZ Superannuation fund. He is seen as a more hawkish voice that could warm up to rate hikes more readily and revive the carry appeal of the Kiwi. Yet, he will not take over for some time. Meanwhile, the Federal Reserve could undermine the Dollar and lift this pair through a backchannel, but we won't know until the rate decision on Wednesday. And by most accounts this will end with a hike an debate as to intention with pacing into the future that will be nuanced. I like this setup, but it needs to check off a few more boxes before I can be confident of its trade potential. We focus on NZD/USD in today's Quick Take Video. 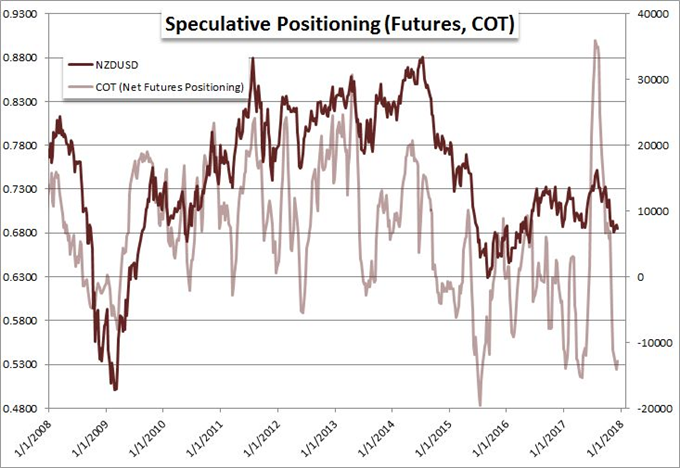 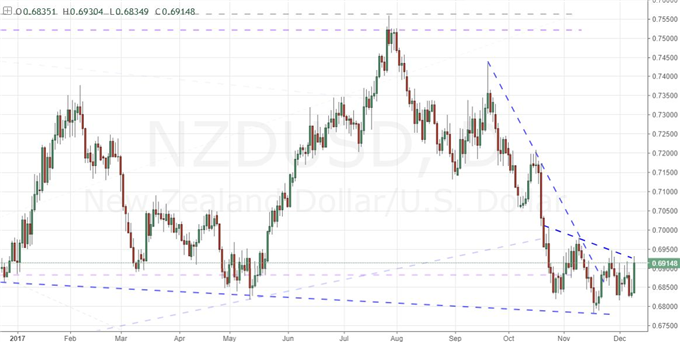