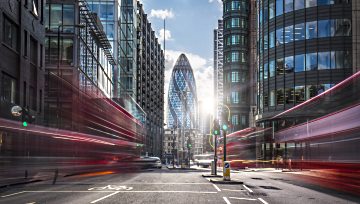 Dollar Range Poised to Give Way with NFP, FOMC in Sight

The U.S. Dollar continues to bounce in a relatively tight range, but with Non-Farm Payrolls on the docket for later this week along with a widely-expected FOMC rate hike for next Wednesday; this range is unlikely to last for long.

- In this webinar, we used price action to look at majors markets ahead of Friday’s release of Non-Farm Payrolls and next week’s widely expected hike out of the Federal Reserve. The U.S. Dollar has been rather directionless of recent, and current price action is testing last week’s high which syncs-in fairly well with a swing-low from two weeks before. We looked at a Fibonacci retracement drawn around the bullish move that started in September, and this offered a 38.2% level at 93.57. A bullish break above this level opens the door for top-side exposure while a break below the 61.8% retracement at 92.59 opens the door for short-side exposure.

- EUR/USD appears to be trying to dig-out higher-low support after last week saw prices push up to 1.1950. The group of swing-highs from October was initially helping to set support but of recent, prices have started to slide below that prior zone. This exposes the prior swing-low around 1.1712, and if we do see support come-in above this price, this opens the door for bullish setups playing off of a higher-low for top-side continuation. As of now, support appears to be forming around a trend-line projection taken from a set of prior swing-highs. 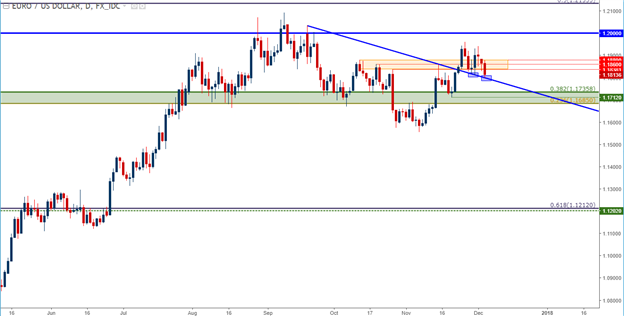 - GBP/USD: We then moved over to Cable, which has continued to push-higher after last week’s news around the Brexit divorce bill. GBP/USD is falling below a key level right now that exists at 1.3478. This is the 50% retracement of the Brexit move in the pair, and this gave us a week’s worth of support after the bullish breakout in September. After this most recent bullish run, we saw some short-term support develop at that level, but selling pressure eventually punched prices back-below. Bullish continuation can wait for prices to move back-above 1.3500, after which 1.3478 could become an interesting area for higher-low support on bullish continuation.

- AUD/USD remains as an attractive candidate for USD-strength continuation. Even with USD getting weak of recent, AUD/USD has remained near longer-term support. This will likely remain as on eof the more attractive venues to trade for USD-continuation, and if we do see the larger theme of U.S. Dollar strength return, we could be looking at a .7500-break.

- EUR/JPY has been range-bound for much of the past three months, with a considerable amount of support building in the zone from 131.42-132.05. The resistance side of the coin has recently come into play, as the 61.8% retracement of the 2014-2016 run at 134.41 has helped to set a previous double-top in the pair. We saw another test near this zone on Friday and since then, sellers have started to take over. This exposes the zone around 131.42-132.05 for bullish support plays. We also looked at the possibility of a bullish mid-line play using the area around 133.10.

- GBP/JPY – Possibly a more attractive candidate for trading GBP-strength than what we saw in GBP/USD. GBP/JPY is digging out support around a Fibonacci level at 150.87. This is the 38.2% retracement of the 2015-2016 major move in the pair. This price has previously helped to set resistance, and we’re now seeing short-term support come-in around this area. Risk-reward with current technical could present a challenge, but a slightly deeper pullback opens the door for a re-test of the previous high around 152.75.