Precious metals are working towards a resolution, but patience is required for now. Oil markets look vulnerable here as the market is leaning heavily long. Equity indices are presenting some interesting short-term set-ups which could evolve soon.

Precious metals remain a ‘chop-fest’ seeking resolution. Gold has resistance right around 1300 and is vulnerable to a pullback towards a trend-line off the December low around the area of 1275/80. Silver continues to grind on a trend-line running higher since July, and could be in danger of breaking soon. It’s doing so within the confines of a triangle, which could lead to a sharp break if support gives way. But a break is needed first before gearing up a bearish bias. If it holds and breaks the top of the pattern then a rally could commence. But the thinking on this end is that risk is growing towards lower prices. 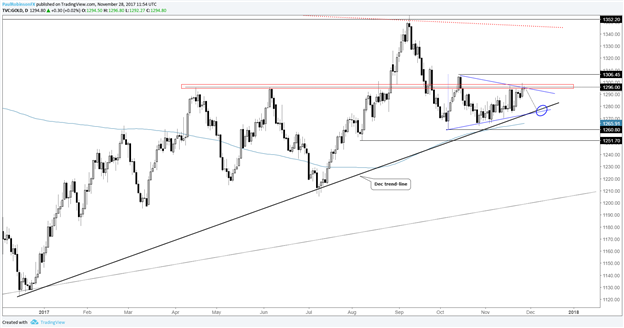 US crude oil has been rallying strongly, but is vulnerable to a pullback as large speculators are extremely long (new record long last week) around the underside of the 1998 trend-line. This would put the recent ‘neckline’ breakout on pause. A drop below 57 could set into motion a decline towards 55 in the near-term. UK crude oil has been weaker than its US counterpart in recent trade by failing to make a higher-high with it. A decline would bring the lower parallel off the late-August swing-low and recent low into play in the mid to lower-61s.

The DAX has been volatile lately, but making no headway in either direction. This could soon change. Price action is coiling up and looking poised to make a move very soon. On the hourly chart we can see a possible continuation-style ‘head-and-shoulders’ which is morphing into a triangle. A breakout is growing closer, with risk increasing that it comes to the downside in-line with the sell-off from recent record highs. If this is the case, we’ll look for a move to the 12676/500 region. A strong push higher has the index back in rally-mode. 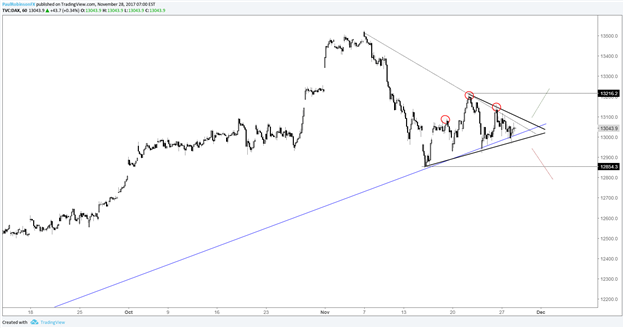 Trading psychology is very important, check out this guide for ideas on Building Confidence in Trading.

The CAC is working its way higher in an upward channel (‘bear-flag’), which if triggered lower suggests another leg down will be in the works. The FTSE is also in a precarious position and if it can’t sustain higher trade soon is at risk of breaking lower towards a support zone in the area of 7315/290.

The S&P 500 is very near the apex of a rising wedge on the hourly. It has bearish implications upon a break, but expectations are tempered for seeing a big sell-off with support not far below around 2580. End-of-year seasonality is also seen a supportive and unlikely to see the market fall apart.

In Asia, the Nikkei is putting in a triangle of its own, and should resolve itself soon. As could be the case with European indices, a continuation trade lower could be in the works. But we’ll wait for the developing triangle to break first before drawing further conclusions.