Will Gold and Bitcoin Rise and Fall Together?

Are Bitcoin and gold one in the same? Is the cryptocurrency the modern take on the commodity that has stood against financial storms for hundreds of years? There is considerable equivalency being drawn between the two - both directly and indirectly - but we should think critical about this connection if we intend to trade either.

Retail traders are more focused on short-term opportunities rather than long-term trends. See how retail traders are positioned in Gold on the DailyFX Sentiment Page (Bitcoin positioning will soon be recorded here as well).

Is Bitcoin the new gold? The epic rise of cryptocurrencies and the massive rally that they have charged over the past few years necessitates explanation. Investors require justification - whether virtuous or not, convincing or not - to jump in and hold on through a rally of the magnitude registered by this benchmark cryptocurrency. There are many explanations being applied to this incredible outperformance, but some of this stretch the bounds of reason. And, while Bitcoin, Ethereum and the other liquid digital currencies can rise regardless of whether there is an agreement on its motivation; it is important to establish reasonable explanations so that we can better analyze market activity levels, participation and simply direction. One of the labels assigned to Bitcoin and its cadre that I feel is more misleading than most is its role as an alternative to traditional markets and all that entails.

Historically, there is a well-established alternative asset used to 'hedge' traditional markets and financial systems: gold. Through many eras and evolutions in civilization, this precious metal has shown its staying power through its stability. We only have to look back to the last Great Financial Crisis in 2008 to appreciate its representation of the role. While it did provide some degree of safe haven appeal, the far more remarkable reflection was found in its surge between 2008 and 2011 when it climbed 180 percent. The motivation for that incredible appreciation was the wide infusion of massive stimulus into the financial markets. The Fed, European Central Bank, Bank of Japan and Bank of England cut rates massively and went on to introduce enormous quantitative easing measures. This resulted in a flood of Dollars, Euros, Yen and Pound in the system that uniformly devalued the world's most liquid reserve currencies. While some funds would seek out secondary fiat that would perhaps avoid some of the intense value loss, gold was once again quick to seize upon its historic role as an alternative. This commodity does deserve this title, but it doesn't always utilize it. With no yield and many currencies for which capital can circulate in a global market, there are more scenarios where the precious metal remains depressed than when it rises with that degree of enthusiasm.

Now consider these same conditions for Bitcoin. If there were to be a universal slump in fiat currencies again, would there by a rush to cryptocurrency to safe guard funds? The market certainly lacks the scale to convince its utility for that. Further, its volatility is nothing short of dangerous for those looking for stability and eventually expecting a stable withdrawal of funds. What's more, the regulation of the cryptocurrency market leaves a very clear risk of hacking and even sudden change in official acceptance in countries that could suddenly create financial problems. Bitcoin is also heavily populated - I would argue dominated for volume - by speculative interests. That is more likely the source of its remarkable strength but is also a key risk for stability for periods that would require absolute trust. In the event of full scale risk aversion, these two assets would likely diverge wildly. Should there be a need for an alternative to traditional assets or fiat, the same. That doesn't mean either is due for a massive change in activity level or direction; but we should consider these assumptions as it can play an important role in our analysis and trading of each. We discuss the relationship between gold and Bitcoin in this weekend Quick Take video. 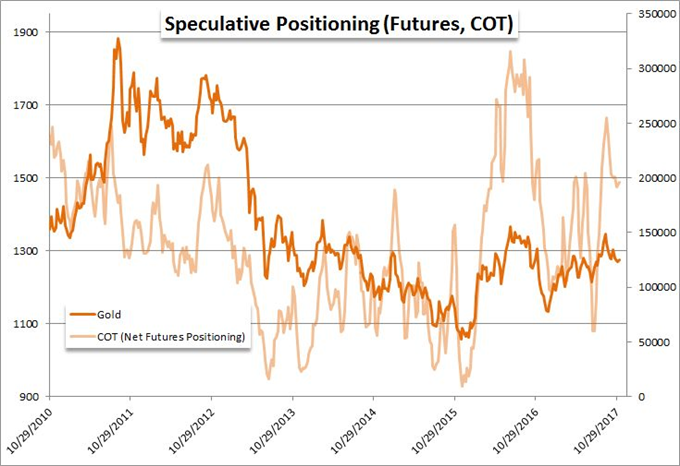 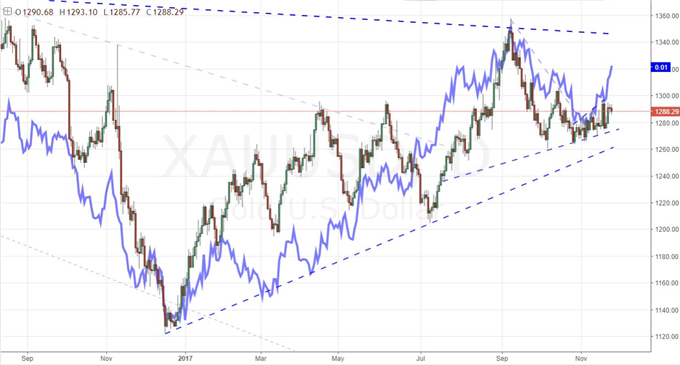 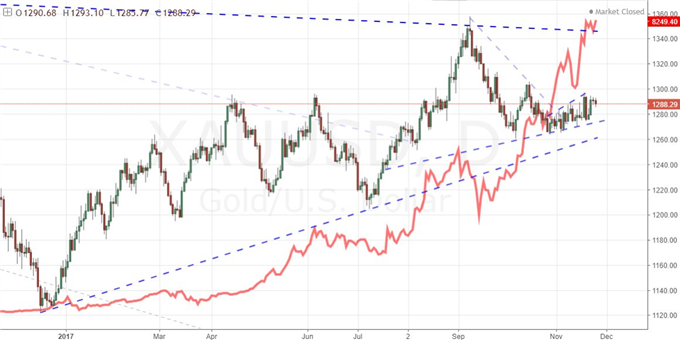