Precious metals caught traders by surprise with the pop and drop since Friday, and puts them in a precarious position. Crude oil looks headed for range-bound conditions, while equity indices seek resolution of recent chop.

Precious metals rallied strongly, then sold off strongly. Both gold and silver formed symmetrical triangles from which the strong pop and reverse took shape from, but the clarity in the latter has become the focus in this sector. Silver not only had a cleaner looking symmetrical triangle which it head-faked out of, but it is putting pressure on a trend-line rising up since July. The head-fake higher and then break of the underside of the triangle would likely lead to decent follow-through in line with the trend lower off the September high. Gold doesn’t have the same clarity, but will certainly go as silver goes. Watching the December trend-line and underside of its respective triangle.

Copper is at an important little juncture here around the 3.10 mark. It's retesting a broken trend-line dating back to June and the trend-line off the October high. A turn lower here is likely to continue the series of lower-highs and lower-lows since last month’s peak.

U.S. crude oil has found solid resistance just below 58 and good support around 55. With large speculators recently buying at a feverish pace, pushing their net-long to a new record, a period of digestion is in order between levels.

The DAX is caught up between support and resistance here on the daily and needs to start clearing on higher or else the risk of the recent chop becoming a consolidation for another leg lower increases. The gap down and reversal on “bad” news yesterday adds importance to the 12900-area. The CAC is postured is a bit more poorly and may be the leader on the downside should we see European equities sell off here soon. The FTSE put in a key reversal day yesterday, but has resistance not far ahead around the 7445 level. After the massive ~20% run seen in the Nikkei the outlook remains neutral to negative as it works off overbought conditions. The S&P 500 has become sloppy while the Dow postures one possibility which could lead to downside prices. But if the short-term ‘head-and-shoulders’ doesn’t start working soon, then it will begin turning into a period of consolidation likely to lead to another leg higher at some point. Stock markets are closed in the U.S. and Japan on Thursday, making for thinner trade as we progress through the week. We may need to wait until next week before we can gain an edge. 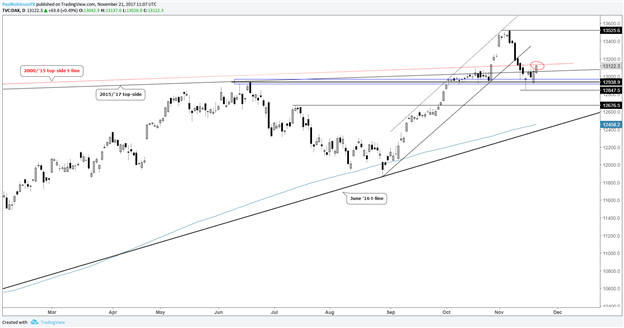