How Long Has It Been Since S&P 500 Made a Serious Bear Move?

Is the S&P 500 setting up for a genuine turn? The US Index has carved out a familiar head-and-shoulders pattern that technicians prize for both its simple value and statistical performance. There is a strong headwind to fight, but a breather is long overdue with exposure at unprecedented levels.

Retail traders often chase the most speculative view of the markets and their appetite show through in their decision making. Retail positioning is often a good contrarian reading, but even a broken clock is correct twice a day. See how traders are positioned in the S&P 500 on the DailyFX Sentiment Page.

I am a sucker for head-and-shoulders patterns; and the S&P 500 has lead its fellow US equity indices into just such a technical position. Among the traditional chart patterns head-and-shoulders scenarios can among the most rudimentary and yet also one of the most convincing due to that very simplicity. At its foundation, this progression of a successive highs and then a lower high with definable support (the mirror of lows and resistance is true for an 'inverse' pattern) is both an aggregate of shifting momentum and simple technical cues. One of the more often overlooked aspects to staging a successful reversal though is a strong, one-sided drive to reverse. Too often, the structure of the correction is spotted without the strong imbalance to normalize - in other words, nothing to reverse. A weekly or monthly chart quickly establishes how far and long the pendulum has swung in one direction.

Those that look for these H&S patterns in the wild will not struggle to find at least a few examples at any time - sometimes they meet even the more stringent qualifiers. Yet setting the stage does not guarantee that the reversal implications will play out, much less prove truly productive. True breakouts (in other words with follow through) are infrequent. Genuine reversals with momentum are outright rare. Therefore, the demands for conviction should be set much higher. Preempting a turn before it has checked off all the proper boxes is running afoul of statistics. What truly bolsters the case for a tide change is the circumstances surrounding fundamentals and 'market conditions'. If there is a truly one-sided market that has led to explicit imbalance and a theme builds behind the risk accepted when attempting to commit to the status quo, the largest possible segment of the market can be encouraged to take up the task of reversing a trend. This is further facilitated when the maintenance of a stretched view is increasingly dependent on a speculative versus investor oriented crowd. The short-term, low drawdown tolerance of traders makes for weakly held conviction.

The S&P 500 finds itself very much at the intersection of so much technical, fundamental and systemic circumstance. Beyond the remarkable projection of record highs and the teasing H&S technical pattern, we have also seen a series of six consecutive gaps lower on daily opens. That is a rare occurrence (only five other instances) over the past decade. Further, looking at the amount of time since we've seen a 20 percent correction from highs (a 'bear market'), 10 percent pullback or even a 5 percent slip indicates how complacent conditions have grown. Meanwhile, fundamentals are routinely jettisoned with a 'this time is different' mentality replacing more traditional measures of value. As threatening as the US equity indices' patterns are, we are not very far along in offering confirmation of a lasting reversal and have every reason to remain skeptical given years of defiance towards fundamental gravity. Yet, the wider the correlation in these losses across risk oriented assets and a genuine intensity behind selling should not be ignored. That said, in the first stages of any serious S&P 500 retreat, the call is best served in the most overbought areas of the market - and that happens to be the US indices themselves. We discuss the provocative standings of the S&P 500 and its counterparts in today's Quick Take Video. 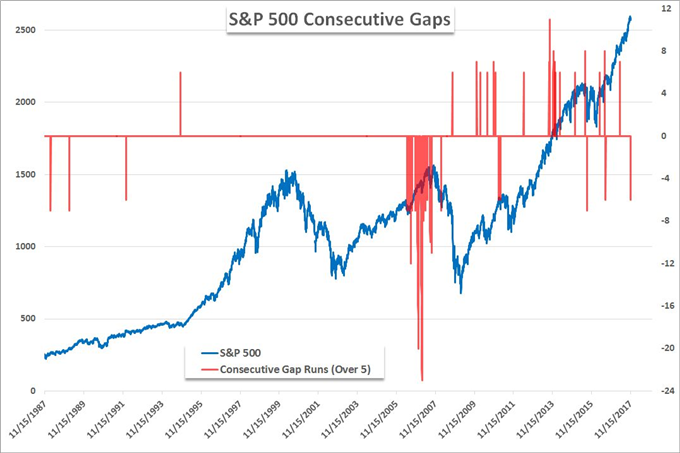 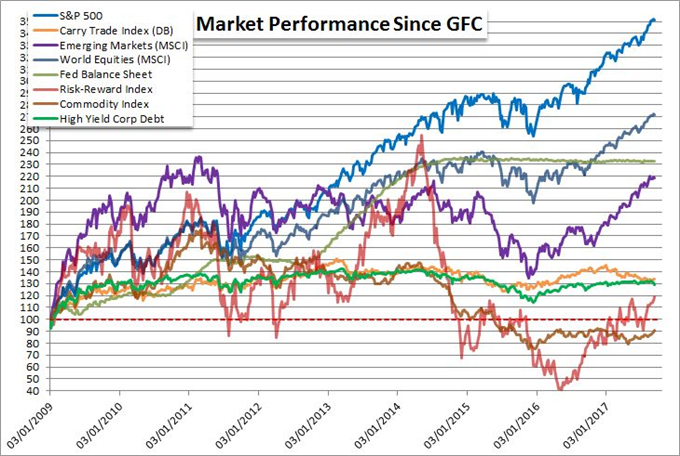 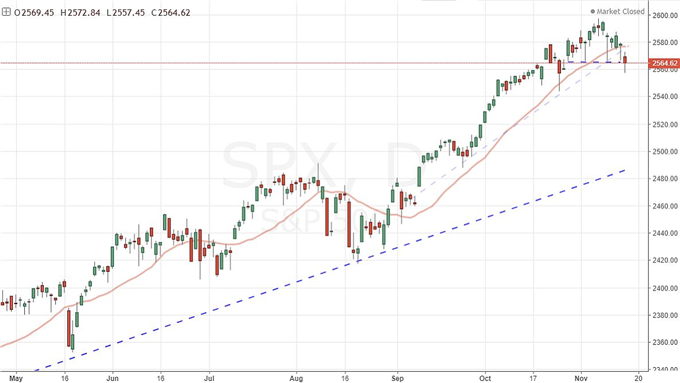