The technical landscape for commodities and equity indices all hold a near-term negative bias, with one particular set-up in the S&P 500 in progress. Gold and silver are both forming triangle patterns, while crude oil looks to continue to retreat.

Gold has effectively gone nowhere the past three weeks, but that looks poised to change soon with the development of a symmetrical triangle right around key trend-line and moving average support. The December trend-line and 200-day are both rising up near the apex of the pattern. While these patterns have a neutral bias, they will often times break in the direction of the trend prior to their development if the market isn’t already too extended (which gold is not). However, it is prudent to wait for a confirmed break outside of the pattern before getting involved. Gold could also hold support and break to the top-side. (We’ll be discussing triangles in detail on Thursday in the second part of a series focused on classic chart patterns. You can sign up here.)

Silver is following gold’s lead in building a symmetrical triangle, and in fact is becoming a cleaner looking formation. It has a trend-line rising up from July as the underside t-line of the pattern and will mark an important break should it give-way. For now, though, it is support until it isn’t and should be treated as such. 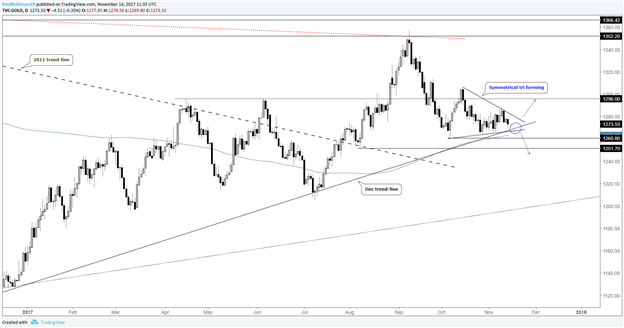 Copper is in the process of forming a descending wedge right at trend-line support off a June swing-low. The pattern paints a bearish picture, but like precious metals we need to first see this industrial metal violate support below 3.05 before running with a bearish bias. WTI crude oil put in a bearish key reversal bar off of resistance near 58. The outlook in the interim is for a pullback at the least to develop towards prior resistance (now support) in the 55s. We also looked at the bigger-picture prospect and the nearly record long position held by large speculators in the futures market. Crude looks to be at a key cross-road. Brent crude is pulling back off of an upper parallel and looks headed towards the lower parallel under 61.

The Nikkei put in a wicked reversal bar last week in the form of a ‘long-legged doji’, which has ended the run for now. A period of pullback, or consolidation at best, looks to be in order. The DAX decline off the top has been fierce and is lacking a willingness by the market to step in and buy the dip. The low 12900s will be an important area for the index to hold. The FTSE is poorly postured, and on further weakness looking for 7315/7290 as the next area of price support. The S&P 500 needs to firm up here very soon or else the rising wedge broken last week looks poised to lead to lower prices. The price action surrounding the rising wedge is even taking on the shape of a ‘head-and-shoulders’ with the ‘neckline’ just below the June slope. The June line held on the initial break from the pattern, but should it break the target becomes the base of the rising wedge in the low 2540s. 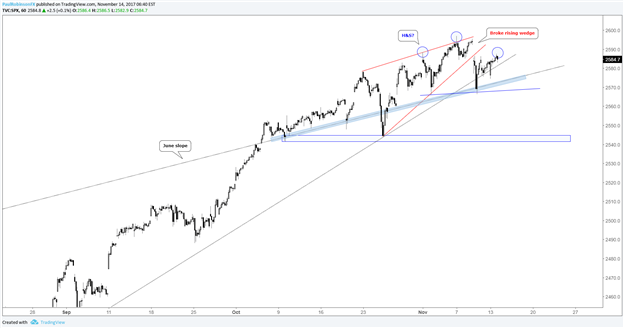