Gold continues to chop side-ways just above a bundle of support levels not far below – the December trend-line, trend-line off the 10/6 low, the 10/6 low itself (1261), and the 200-day MA. The floundering price action just above a solid cross-road of support suggests it may not hold, and if the dollar is to have any say in this, then it won’t. Silver isn’t as clean a picture in terms of levels, but weakness looks more likely than not, just maybe not to the degree as it will be in gold given it has held up better.

Crude oil has been on a tear, trading at levels not seen since June 2015. It’s trading at a bottom of a range that was put in place back at that time and could pull off from here given how extended it has become in such a short time period. Support comes in around 55. From a macro standpoint, oil has broken out of a long-term bottoming formation, but is testing a long-term trend-line extending higher since 1998. The pattern suggests higher big-picture, but the trend-line suggests it still has a little more work to do to make good on it. The fly-in-the-ointment here is futures positioning, as large speculators are nearly record long. This could prove to be a head-wind as buying power runs low. We’ll continue to keep an eye on this development. In the short-term, a pullback/consolidation is due. Brent crude is trading at an upper parallel extending back over 3 months and offers a point to look for it to pull back from. Trading could become two-way for both oil contracts as the market digests recent gains. 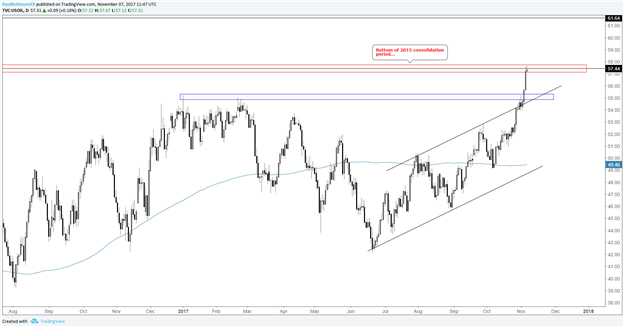 The Nikkei has gone wild, running over 19% in the past two months. It is now trading at its best levels since January 1992. It is a tough one to chase at this point, but shorting holds no edge at the moment. The DAX and CAC are both being held high with the help of both a weak euro and strong risk appetite for stocks. The FTSE is trading around some stiff levels here, but appears headed higher. The S&P 500 has one potentially bearish short-term sequence by way of a rising wedge, but if it is to lead to lower prices it will need to turn down in the next day or two. Overall, the feeling is that we will probably end the year somewhere near or at the highs, with potential for a pullback first before seeing another thrust higher. Traders will likely be best served being patient and waiting for a better set-up than the one’s we are seeing now. There are some decent opportunities out there in FX-land which are currently presenting themselves, we’ll be discussing those in Wednesday’s FX-centric webinar.