Today we have the U.S. jobs report, where after a negative print for September due to hurricanes, we are expected to see a big rebound in NFPs. The market is looking for +312 jobs added during October. It’s unclear due to the unusual circumstances surrounding the hurricane-impact how much the market will react to the print, but if we see an unusually large deviation then perhaps we’ll get some much-desired volatility.

The US Dollar Index (DXY) continues to steady itself after breaking out of a broad bottoming formation, and on that EURUSD is likely to lead the index higher through continuation lower out of its ‘head-and-shoulders’ top. The euro is meandering just below its neckline, putting in a small bear-flag on the 4-hr. Follow-through soon is expected, but even if it pops up above the 'neckline' the topping formation will remain valid as long as it doesn’t violate the trend-line off the September high. If it does at some point, then alternative paths will need to be considered. 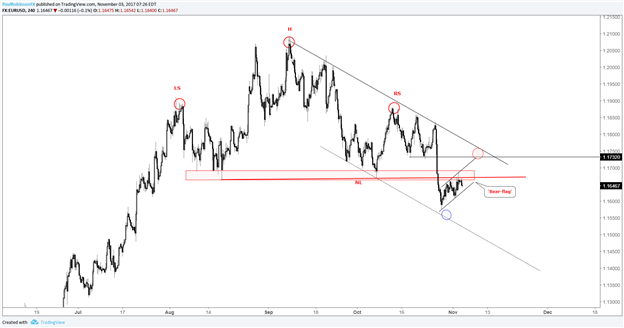 GBPUSD got throttled yesterday on a ‘dovish-hike’ out of the BoE and has cable down into a pretty important area of support near 13000. Another thrust lower below support could set off a 200-400 pip decline. USDJPY continues to battle a confluence of resistance lines by way of a downtrend line off the August 2015 swing-high, horizontal resistance dating back to May, and the underside of a trend-line off the Sep ’16 low. A blast on into the 11500s is likely to see it head to 11800+. But it must first clear first before it can do so.

Check out this guide for ideas on Building Confidence as a Trader. 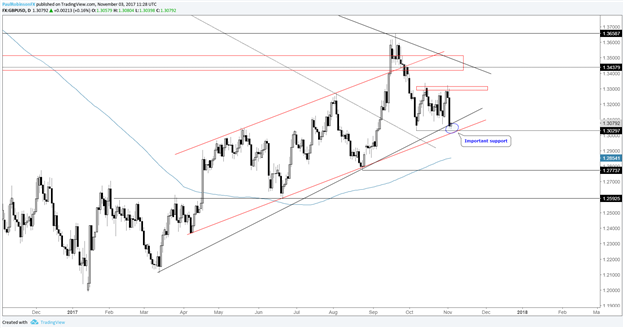 AUDUSD is turning down from resistance around 7730, and with that a move to the trend-line off the December low looks to be in order (around the 7580-mark). The bounce in NZDUSD looks to be nearly complete, if not already, and headed towards a long-term trend-line (2009-current) around 6700.

We took a look at a few cross-rates, but the focus at this time due to clarity remains on the moves in USD-pairs. Crosses we looked at included EURNZD, EURGBP, GBPAUD, EURJPY, NZDJPY, and AUDJPY.

Gold is caught between confluence of support around the 1264/60-area and a trend-line running down off the September high. Silver is also getting bottled up between a trend-line off the July low and September high. Clarity is lacking, but with precious metals getting jammed up there should soon be a resolution. Perhaps with a burst in the dollar. We’ll discuss more in Tuesday’s commodities & equity indices webinar.

Global stock markets are strong, but showing limited opportunity due to lack of volatility. The DAX is extended and up against a top-side trend-line, but not showing anything bearish. The FTSE is working on a new record close with the help of yesterday’s sell-off in sterling. The Nikkei is an absolute monster as it heads towards the 1996 peak at 22750. The S&P 500 is possibly showing short-term traders a bearish configuration, for more on that see this morning’s piece.