The Bank of England is expected to hike rates for the first change in policy since the post-Brexit rate cut and QE top off. How will this move impact the British Pound? Watch our live webinar coverage of the BoE decision on DailyFX.

Unlike the Federal Reserve's lack of motivation for the Dollar this past session, the Bank of England's monetary policy decision Thursday is likely to generate a significant response from the Pound and UK-based markets. This past session, the US central bank decided to hold its monetary policy unchanged at its (admittedly, lofty) 1.125 percent median. Not only was this an outcome of 'no change' it was fully expected according to instruments that we use to gauge hedging - swaps and Fed Funds futures. Pound traders face the opposite set of conditions. The prevailing forecast is for a rate hike from the BoE - the first move since the central bank last cut in the aftermath of the Brexit. What's more, there is still generous room for debate on the outcome and subsequent trend. As 'active' as a hike would be for the markets, that outcome alone would not likely set the Sterling on a self-sustaining course. Beyond the initial rush of volatility from a pair like GBP/USD in the first 15 to 60 minutes after the announcement is the grey area of what they intend to do going forward that would be derived from the details of this event.

This particular UK monetary policy event comes with additional features for which traders can speculate through. The 'Super Thursday' meetings are quarterly rate decisions that include the Quarterly Inflation report as well as Governor Carney's remarks. This is very similar to the quarterly Fed meetings that have Yellen pressers and the S.E.P. Considering the details in this event, it is not difficult to establish what would be the clearly 'bullish' or 'bearish' outcomes for the Pound. For a bearish result first, the most definitive result would be no rate hike. Skipping a move now against such heavy expectation would see the Sterling tumble - especially amid crosses that it has climbed more extensively like GBP/NZD and GBP/AUD. At the other extreme, an explicitly bullish outcome would be one where the BoE not only hikes but makes clear that they intend to follow a hawkish course to continue raising rates through the future at a semi-regular pace similar to the Fed. Such a course is far from being accounted for in current price and would see GBP/USD overtake 1.3600 and start a genuine climb towards 1.5000. A hold is unlikely to happen as the outcome could cause undo market volatility and they do have an inflation problem. A run away hawkish turn is even less likely because the BoE is particularly concerned with Brexit. Nevertheless, we should at least have a view should these surprises show up.

The more probable outcome for this event is something that falls in the middle ground. A rate hike backed by a 90 percent probability according to swaps will be quickly absorbed as justification for the currency to have reached the heights it has already scaled. From that point, it would be interpreting what kind of subsequent policy ambitions the group has for the future. The BoE has a problem in that it has inflation that is significantly above target but it is also regularly concerned about the negative economic and financial implications of the Brexit fallout. That means, they are unlikely to commit to a preplanned tightening regime. The next stage to asses is whether their move will be a 'one-and-done' in which the hike with no ambition to move again through the foreseeable future unless forced to do so (likely be CPI). If that is the case, the Pound would struggle against the Dollar where a path is set out. Versus the Euro, the Sterling could climb as the Euro is deflating after last week's ECB decision. We run down the importance of the BoE decision, the reason why it will be more market moving than the Fed and the scenarios in today's Strategy Video. 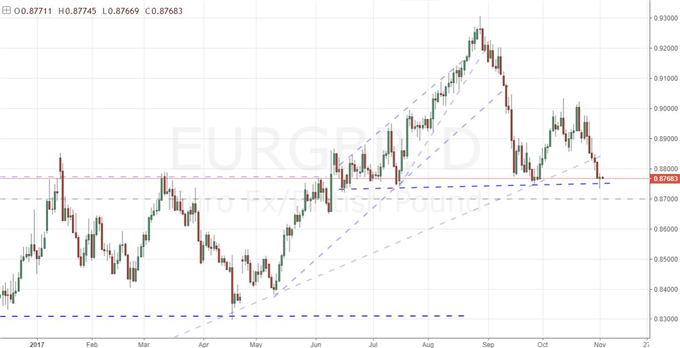 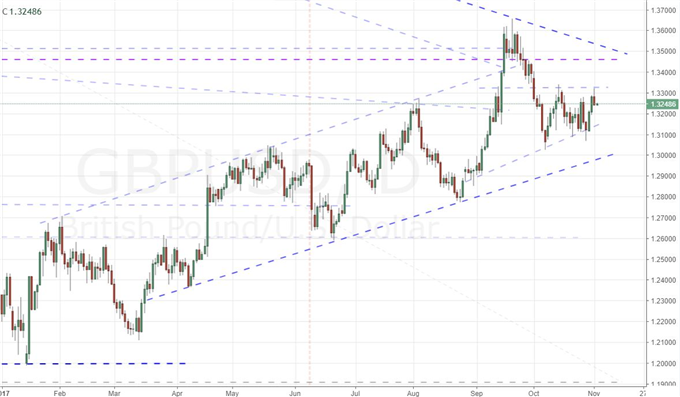 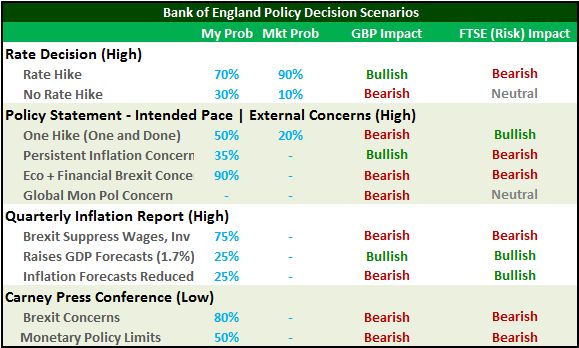