Tune in with Paul tomorrow at 9:30 GMT for “Becoming a Better Trader: Classic Chart Patterns, Part I” – Sign Up here.

Later today, we have the FOMC rate announcement at 18:00 GMT time, with almost zero expectation for the Fed to raise rates. The market is effectively banking on another 25-bps to come at next month’s meeting. Today will be about the policy statement, but it looks unlikely that we will see any wild gyrations out of markets as a result of today’s meeting. But one should always be prepared...

Last week, the US Dollar Index (DXY) broke above the ‘neckline’ of a nearly three-month-long inverse ‘head-and-shoulders’ led by the subsequent breakdown out of the same type of pattern (but in reverse of course) in EURUSD. The current backing-and-filling looks to be just that before another thrust in the days/weeks ahead. 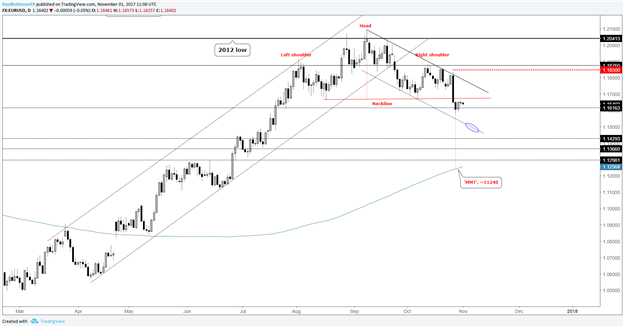 GBPUSD is holding strongest amongst USD-pairs, with it currently trading at resistance so that may soon change. Tomorrow is ‘Super Thursday’, where the BoE is expected to raise rates by 0.25% to 0.50%. The central bank will also release its quarterly inflation report. Expect volatility. But if the dollar is to begin trading higher across the board, then look for cable to turn lower soon.

USDJPY is continuing its grind higher but has a cross-road of resistance to overcome before it can challenge the remaining barrier (mid-11500s) before looking towards the December high over 11800. The intersection is viewed as resistance until it isn’t, but at some point soon it looks likely to be crossed. Then we’ll become increasingly constructive on its outlook.

In the USD-spectrum, we also looked at USDCHF, USDCAD, AUDUSD, and NZDUSD.

Turning to cross-rates, we focused on a couple of Euro-pairs. EURNZD put in a nasty weekly reversal bar last week, and between price action last week and early this week it formed a ‘head-and-shoulders’ pattern which was triggered on the 4-hr time-frame. But, there is good daily support in the current area and a break below 16750 is needed to clear a path lower. Speaking of good daily support, EURJPY has really big support in the 13130/80-area. As long as it holds then the recent double-top won’t be officially triggered. It’s a big line in the sand for both markets – stay above bias is neutral to bullish, break below and there is room for a decline. EURGBP broke a nearly two-year-long trend-line and is testing price and 200-day MA support. It could be on the verge of getting hit further if it doesn't bounce from current levels. (For the euro-cross portion of the video, click here.)

Gold is a tough spot right now with it trading in choppy fashion lower but having yet hit confluence of support near 1260 to see ‘what it’s made of’. Global indices are strong to very strong. The Nikkei is blasting higher, with sights now set on the 1996 high at 22750. The DAX & CAC are benefiting from both a weak euro and strong appetite for stocks, globally. The S&P 500 is setting up for yet another record high. It’s tough to be a fresh buyer of indices at these levels, but even tougher trying to find a top.