Gold continues to push lower in a persistent fashion, with clear lower-lows and lower-highs visible on the 4-hr time-frame. There is minor support around 1267, but the area of strong interest arrives in the 1250/53-area. There is confluence between the trend-line rising up from the December low, 200-day MA, and a pivot carved out in earlier August. Given at that point the drop will have been over $100 off the September high gold will be fairly oversold, and having strong support available could potentially offer up a nice swing-trade from the long-side. A turnaround at that juncture or better yet a bullish rejection in the form of a reversal candle will put that idea front and center. Until then, though, the path of least resistance remains lower. 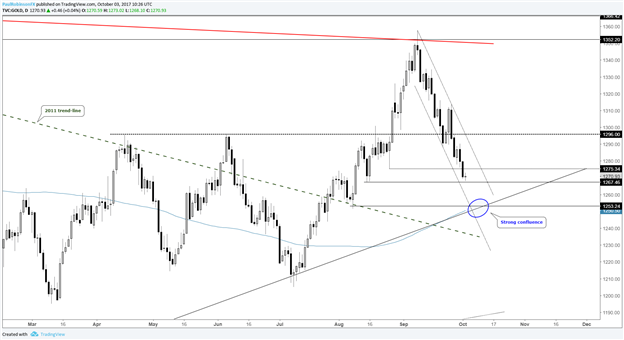 Copper could be trying to form a bottom here after declining off last month’s high, but will need to sufficiently clear multiple stall-points right around 2.99. A break above this threshold should lead to a move higher, but it will be respected as resistance until then.

Last week, crude oil was rejected with force from near confluence of horizontal and trend-line resistance. This has led to a test of the July high. Oil may find support but given the velocity at which it has dropped into this level it may not hold for long. A clean snap through 50 opens up a path towards the trend-line off the June low in the vicinity of 48. 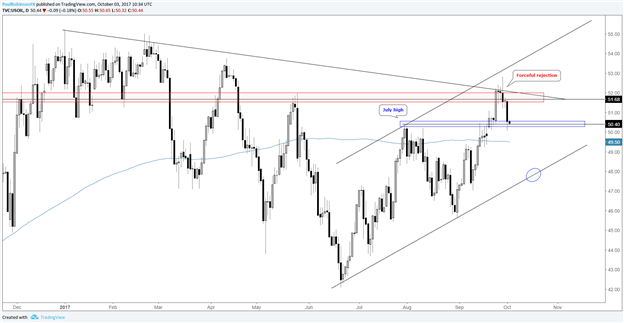 The S&P 500 continues to carve out new record levels after holding the August high. There are a pair of top-side trend-lines which we have been viewing as spots for the rally to stall-out at. One was exceeded yesterday (March t-line), while the more important one extending over peaks since June lies just ahead. We may see the index take a breather at that juncture. The Nasdaq 100 has struggled around the 6k-mark, and should it fail to break higher soon a shallow pullback may complete a nice-looking ascending wedge from which it could launch higher from later on. 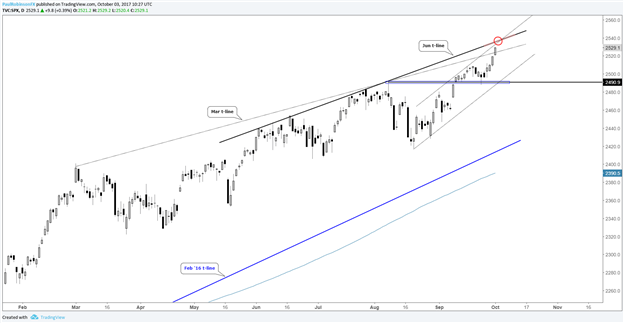 The Nikkei is continuing on its way towards the 2015 highs, which if exceeded will put the index into territory it has not seen since late 1996. There is a small top-side trend-line about 150 points above before we can see any kind of significant new highs beyond 20952. The FTSE is trying to play catch-up to other major global markets after breaking out above the 7300-area. The DAX is closed today, but tomorrow it could be on its way to testing and exceeding it prior record high of 12951.5. It’s been an impressive run off the August bottom with the help of a weakening euro, but it will be buyer beware on a breakout. However, just because it is extended doesn’t mean it will be a short. At least not until we see bearish price action to indicate such. The CAC continues its march from the four-month-long bull-flag, taking out one level of resistance after another. Minor dips are still viewed as buying opportunities, with the index looking poised to soon see the May high at 5442. 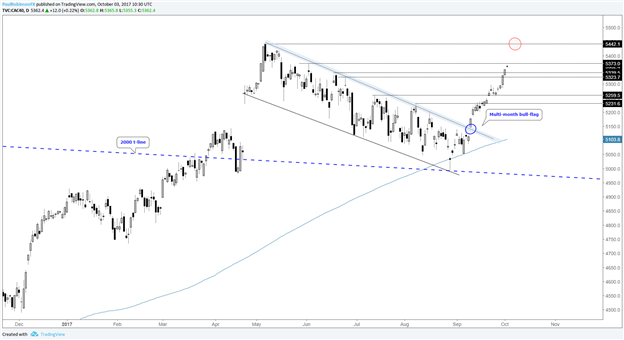