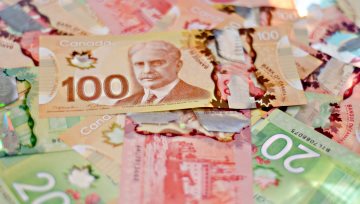 How strong is the broader bearish trend for USDCAD and how much weight did the 1.2400 resistance hold among retail speculators? See current position for the trader group on the DailyFX Sentiment page.

Monetary policy continues to lead the biggest speculative movements in the FX market. Yet, the conditions of these theme have changed materially in just a year. This time in 2016, there was only one major central bank that was promoting a hawkish agenda - even a moderate one. Nowadays, anticipation of inevitable, but variable, ambitions to tighten extremely loose rate and QE programs is the norm. Amid this general hawkish anticipation, there have been a few prominent leaders among the major currencies. While the Euro has been proven the speculative champion of 2017, the Canadian Dollar holds the title for specifically the third quarter of the year. That was prompted by the Bank of Canada's unprecedented - at least in this cycle - back-to-back rate hikes. That charge earned a near-13 percent tumble from USDCAD. Yet, perhaps that particular move and the Canadian Dollar's strength in general has over-reached.

It is hard to dispute that the Canadian currency did not earn a rally this year with the sudden and aggressive turn its central bank commanded. Yet, as with most fundamental shifts, speculative interpretation likely pulled the market too far. Despite seeing two consecutive rate hikes, the probability that the policy group would be able to keep up such a remarkable pace was extremely low. That didn't prevent the market from hoping and pricing a more ambitious drive however. Overnight swaps have been pricing in a more than 70 percent probability that the BoC would move again at its next meeting and the Loonie blew through resistance across its pairings. It is that reach beyond reasonable expectations of pace that sets the stage for a high risk and relatively high probability correction. And, the early phases of such a move have developed this week.

This past session, the BoC Governor, Stephen Poloz, made a concerted effort to take some of the lift out of hawkish momentum behind his currency in a speech and separate press conference. He warned that the central bank was not on a preset course and that they would be cautious with their policy implementation going forward. Both remarks are standard central bank language for setting expectations for a measured pace of normalization. Looking to overnight swaps, the near 46 percent probability of a hike at the upcoming meeting dropped back to approximately 29 percent. Projections for December dropped from 69 to 65 percent. That is still remarkably hawkish - far too hawkish - in a world where the norm is record low interest rates and some degree of unorthodox accommodation. How far has the Loonie overshot and will policy officials and data continue to fuel a retreat? We focus on USDCAD and the other Canadian Dollar crosses in today's Quick Take Video. 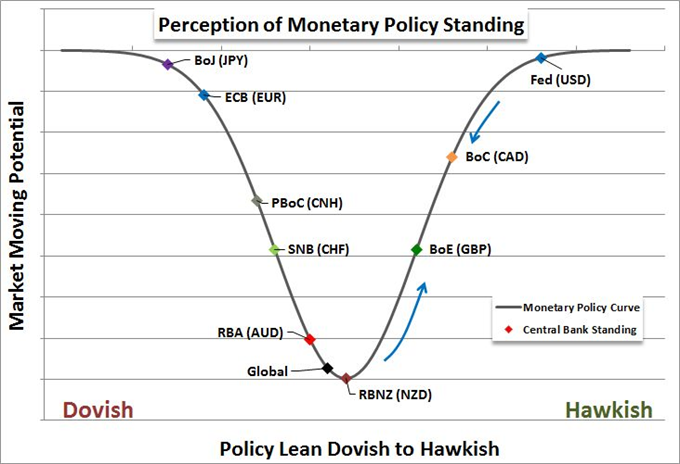 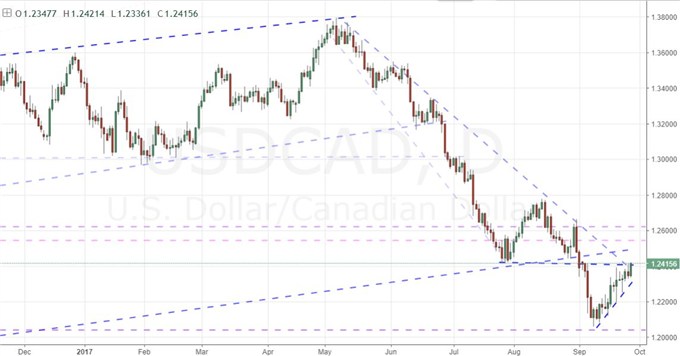