Precious metals received a bit of a lift yesterday with North Korean tensions once again escalating, but while gold rose modestly silver failed to muster much of a rally. Gold held the 1290-threshold we looked at last week and while it has experienced a bounce from there the price action isn’t fully convincing that it will last. The futures market shows a profile among large speculators which is viewed as a headwind for precious metals as they built up rather large long exposure since July. A break below 1290 would be an important break of support and clear a path lower. Silver has been the weaker of the two key precious metals, and as such remains the favored target for shorts. Its struggles around a confluence of recently broken support in the low-17s consisting of price, 200-day, and July ’16 trend-line keeps pressure on the metal. 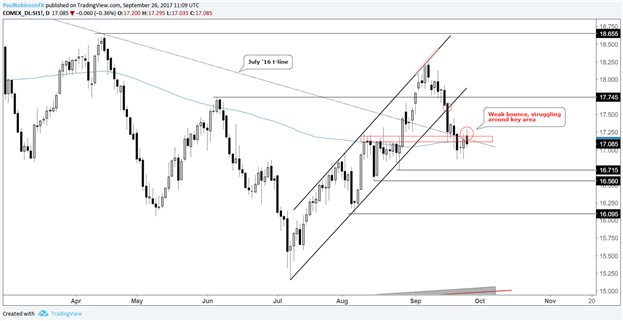 Check out this new trading guide – Building Confidence in Trading

Crude oil has been a tough one to get a handle on at times over the past 1.5+ years, with large gyrations leading to no overall net movement. Right now it is on another one of its swings (upside obviously) and given the propensity for both rallies and sell-offs to fail we look for this one to fade off soon around trend-line and price resistance near 52. However, conviction isn’t particularly strong just yet. We looked at a broader possibility, with a long-term ‘head-and-shoulders’ potentially coming into play. But for this to come to fruition it will likely take some time to come to fruition (we looked at the weekly chart). For it to form we will need to see oil turn lower very soon to cement the ‘right shoulder’.

We’ve seen the North Korea/U.S. stand-off escalate on several occasions but so far the stock market is dismissing it as a ‘war of words’ and nothing more. This is evidenced by the repeated times global markets have shrugged off these escalations. The risk is certainly out there that this could go from words to actions, so it’s worth serious consideration when taking on risk. But so far the price action remains relatively bullish for some of the major markets.

The DAX is grinding higher in a channel after surging above the 12300-level. The July swing-high is close at 12676, but given the nature of the upward sloping consolidation in such close proximity it might not turn out to be much of a hurdle to overcome. The CAC continues to look solid after a significant ‘bull-flag’ breakout earlier in the month. It could use a little period of digestion after the recent run, but overall higher prices are expected.

Yesterday, the S&P 500 dove below the prior record high set in August only to recover back above by the close. The decline off recent highs has been gradual and looks corrective in nature. Near-term, as long as yesterday’s low at 2488 holds then we look for a move higher or sideways at worst.

The FTSE is the outlier here, in that it recently broke important support surrounding 7300 and has a bearish posturing unlike other major indices. It is currently testing that area as resistance and as long as it stays below then it remains vulnerable to another round of weakness.