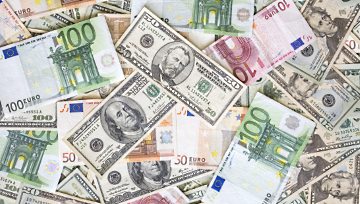 We seem to have - at least temporarily - avoided another true collapse in risk trends. This makes for the perfect time to evaluate what currencies among the majors stand to lose the most when mild indigestion in the speculative rank turns into a full blown collapse in confidence. When that turn is inevitably made, the standings of the majors will not likely follow the standard evaluation of 'risk' and 'safety' that we have come to expect over the years. When faced with severe financial stress, absolute haven qualities may inevitably reestablish themselves, but those standing to lose the most premium and height on the disruption has substantially changed. The playing field has shifted with the collapse in yields across the world. High yield currencies find their own rates at historical lows and carry virtually nonexistent. These currencies have suffered for this development, but we have seen a speculative turn to compensate for that. Now we find markets affording value to forward looking rates and yield changes which further leverages the speculative nature of value.

If gains afforded to rate forecasts is one of the metrics that have leveraged speculative dependency and render currencies at-risk of market-wide risk aversion, it would seem that the Dollar would be near the top of the charts. The Greenback surged through 2014 and 2015 well in advance of the Federal Reserve's first rate hike (in December 2015). That move was eventually realized and three more were tacked on through present day. This shifts more of the value on realized advantage rather than overt speculation. Yet, what is even more remarkable is the currency's performance through 2017. The Dollar has steadily dove through this year to significantly reduce the perception of a stretched market. It is perhaps a stretch to suggest it is fairly valued at its current standing should sentiment take a turn for the worse, but it is far closer to equilibrium given the economy and yield behind USD has proven itself to be legitimately ahead of its peers.

For the Canadian Dollar, a rate hike from the Bank of Canada this past month offers a degree of engrained value of its own. Even one hike is a boon compared to most other peers. However, the surge the 'Loonie' has generated these past few months was extraordinary for mere speculation of a single hike with heavy doubt over the pacing of subsequent moves. If risk aversion were to sweep in, the hope of subsequent tightening would quickly vanish; and the CAD would certainly have excess premium that it would have to work off. For the Australian and New Zealand Dollars, that excess is far greater. Both currencies have followed in the wake of their Canadian counterpart with hearty gains but there have been no actual moves to tighten. What's more the RBA and RBNZ respectively have actively tried to squash rate speculation. Both currencies have recently started to deflate, but they are still out on a limb of speculation. The most at-risk of the majors should sentiment sour is the Euro. This has been a star currency in 2017 despite the fact that the ECB has maintained its massive stimulus program. Very early speculation of normalization is looking at the first step to pull in the reins in 9 to 12 months - and that is optimistic. In the meantime, the benchmark Euro rate is negative. This is a currency that has reached far on pure and far-looking speculation. It thereby has the most to lose should a passive march to risk exposure and policy firming be disrupted. We discuss the most at-risk currencies should sentiment drop in today's Strategy Video. 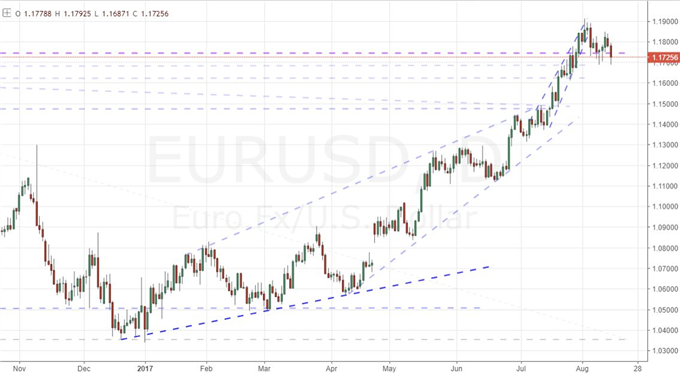