Future market developments - whether known ahead of time or not - will inherently carry a measure of risk for traders. That is why it is termed 'event risk'. Given our current state of complacency, it would seem that this basic reality is lost upon these markets. In accounting for what a hypothetical fundamental or structural development may do to the market, we have to account for both its probability versus potential. These are different concepts at their core that inevitably contribute to a comprehensive influence. Probability refers to the chance that various possible scenarios will occur. Potential, in contrast, is the impact that those different results would have on markets if realized. In general, low probability events have more remarkable potential as the majority is ill prepared and subsequently the largest portion of market participants are forced to reposition - thereby generating volatility as well as a certain degree of trend. In high probability outcomes, the collective anticipation usually prepares traders for the outcome ahead of time thereby leaving few to play catch up.

While there is considerable variability in assessing potential versus probability for different market events, it is hard to argue that the current balance through the market vastly underprices the risks the financial system faces moving forward. This is a no doubt another side effect of the engrained complacency that is so prevalent across the global landscape. Looking ahead, the 'easiest' equation to make is the ECB rate decision. There is very little chance that a true change in monetary policy is in remotely in the cards. Therefore the focus is on the course of future policy intentions. In that breakdown, a persistence of vague dovish restraint is most likely with a market impact of a passive Euro retreat. Alternatively, if there are provocative views issued - perhaps the discussion of criteria for the first hike and/or loose scale of the stimulus withdrawal plan - the impact for the Euro could be quite severe. It would not be an exaggeration to suspect EUR/USD could shortly find its way above 1.1500 should the ECB make a clear effort to acclimate the world to a reversal on accommodation.

In the more nuanced events, we retain a full importance of their outcomes; but the probabilities are more complicated. For the UK election, the Brexit reaction hangs over Pound and FTSE traders. That said, this is not just a 'majority conservatives' versus 'majority labour' assessment. There is a high risk that the Tories lose a portion or even their full majority over Parliament which in turn could through expectations of a steady and measured Brexit into disarray. For the testimony scheduled for former FBI Director James Comey before Congress, there are too many possible scenarios to reasonable expound here. The threat of a full-blown scandal resulting from this event is relatively low; but its impact on the Dollar, S&P 500 and general risk markets could prove quite severe. Looking at market anticipation via implied volatility, we see little concern or hedging effort taking place according to FX options. Given the combination of such open and high important events, GBP/USD's price and implied volatility levels speak to so much in the market. We reinforce the frequent probability versus potential conversation given the high profile event risk ahead in today's Strategy Video. 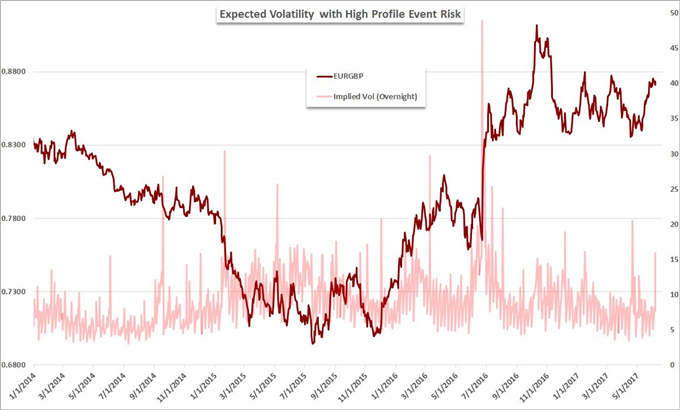 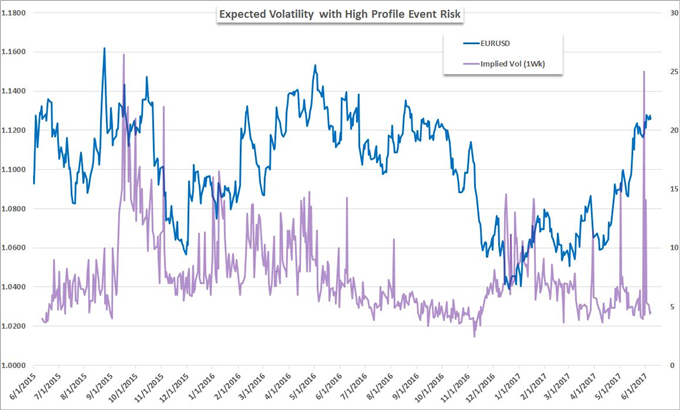