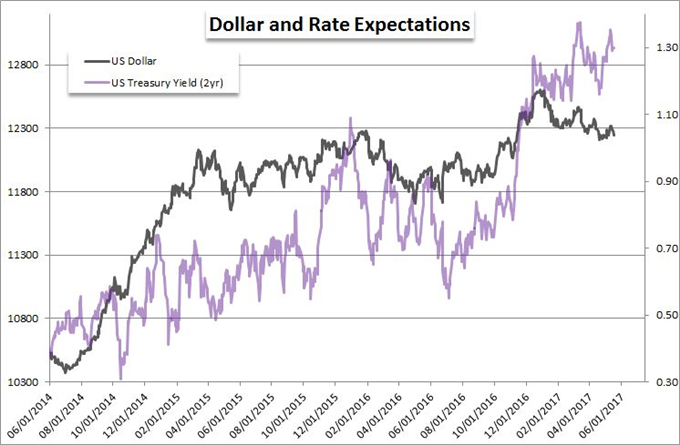 See how retail traders are positioning in the Dollar-based majors as well as benchmark Indices like the S&P 500 and DAX using the DailyFX speculative positioning data on the sentiment page.

The Dollar is a unique currency for many reasons. It is the most used traditional fiat in the world for absolute transactions as well as reserve operations. The currency represents the world's largest economy. Further, it has adopted a status as a leading high return currency thanks to the bold course reversal from the Fed in a world dominated by its doves. However, when we look closer at the circumstances surrounding the Dollar and the conditions of the market that promise to shape the future; we recognize that there is perhaps a greater skew than many may appreciate. It is possible that the USD continues to drop after its multi-month turn and the exclamation of its four-day severe drop through Wednesday. However, such a course would follow more goldilocks conditions and likely be measured in pace.

First, it is important to understand where the Greenback finds itself today. Assessing that requires an appreciation of the broader financial conditions as much as an understanding of the currency's individual aspects. There is a staggering degree of complacent chase for slightly higher yields in the financial system that has sent traders scrambling for every scrap of yield at certain times and more recently has sent speculators on the hunt for investments that will find passive cash inflow that can be preempted and thereby taken advantage of. In these circumstances, the rising - though still extremely low - yield from the Fed has catered directly to these atypical appetites. The Federal Reserve has turned the corner on its exceptional easing program and has pursued three rate hikes against other major central banks holding their record low yields and keeping their stimulus programs on the course of expansion. That does look appealing for complacent conditions.

But, what happens if market start to heat up? In the case of full risk appetite - as lacking for potential as they may represent given the extreme reach on risk assets already - the Greenback is likely to climb as marginal returns will favor the existing premium for US assets and the subsequent boost to financial and economic health would further leverage rate hike potential for the Fed. 'Heat up' may also speak to situations whereby the market is hit by fear and panic. In that case, the risk-oriented Dollar could flip back into its ultimate safe haven role as the focus no longer pays any heed to yield but rather prizes only safety of capital. With that said, there is a scenario whereby the Dollar continues to fade. In a very constrained pace of risk aversion, there is an orderly exit of risk assets that doesn't spur the need for absolute liquidity. The Fed's outlook dims and there is a greater demand for yield to compensate the slow rise of uncertainty. Yet, such an outcome seems almost unbelievable. Either the deep complacency would draw markets back up or the extreme exposure would tip a measured risk aversion effort into a tailspin. So where does that leave the Dollar's likely options moving forward? We focus on the Greenback in today's Strategy Video. 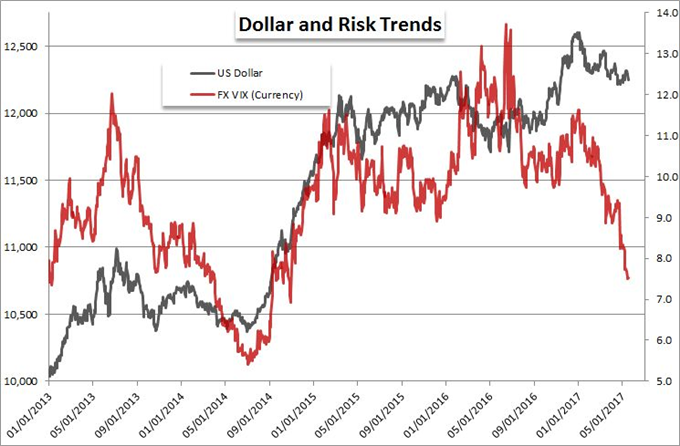