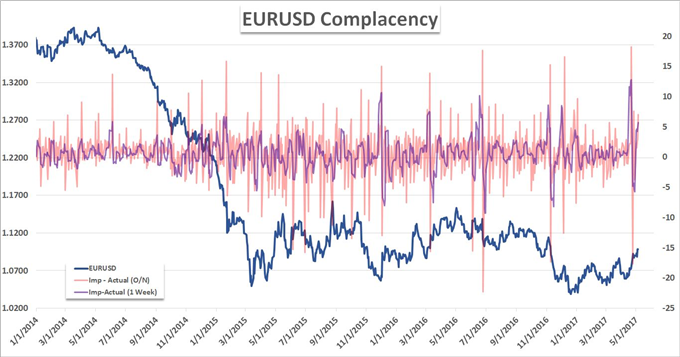 It seems pain is not a sufficient learning tool for the market. Not long ago, we witnessed extraordinary volatility following two events in which the market clearly ignored the extreme skews in for the different outcomes. Both the UK's EU Referendum vote (Brexit) and the US Presidential election carried outcomes that would be considered 'status quo' and those that would usher massive change. In both cases, the change scenarios carried even chance of occurring according to polls heading into their respective votes and their realization threatened significant movement from the market. Nevertheless, the market treated both events as if complacency was the inevitable outcome. In each case, the markets were turned upside down for the assumption.

For the US election back in early November, the assumption was that Democrat candidate Hillary Clinton - who was promising few major changes for the country's economy, financial system and trade relationships - was expected to clinch the Presidency even though opinion polls put her only modestly ahead in the opinion polls. The outcome was only a modest surprise in polling terms, but the market impact was dramatic. A charge higher for the S&P 500 and Dollar followed the outcome of the election. The skew for the Brexit was similar in circumstance, but the impact was more dramatic. Despite a close race between the 'remain' and 'leave' camps, the market was heavily speculating on the former. When it became clear that the electorate had voted to withdrawal from the EU, the Pound collapsed. And now, we once again find a proximate vote with outcomes that are the polar opposites in terms of market impact.

After the first round of the French Presidential election, the two most popular candidates moved on for the inevitable runoff. Though Emmanuel Macron and Marine Le Pen were expected to make it through, their potential impact on the Euro and regional markets could not be more different. Macron's platform is one that looks to make few waves for France's position within the EU and therefore poses little threat to the shared currency. In contrast, Le Pen has said an EU referendum could be brought to the polls by September and an exit from the Euro was inevitable. After the first round election, fear had dropped sharply and the currency climbed as the exit polls showed a tangible favor for Macron. While the probabilities are more significantly skewed compared to the Brexit or US election, the severity of the unexpected outcome is far greater. To go long the Euro and its relative financial assets would yield little opportunity but carry extreme risk. Is it worth the risk? We discuss the extreme skew in potential and risk/reward potential for the French runoff election along with the lessons to take away for similar, future events in this weekend Strategy Video. 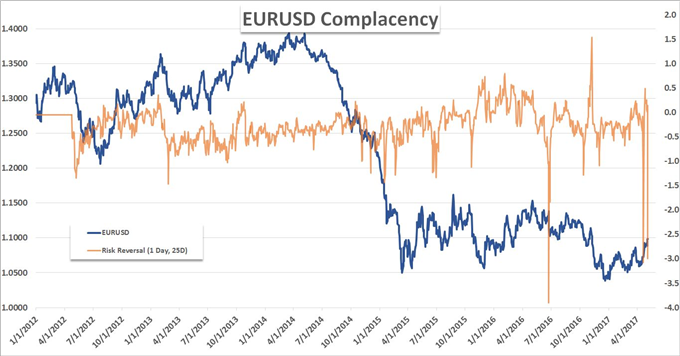 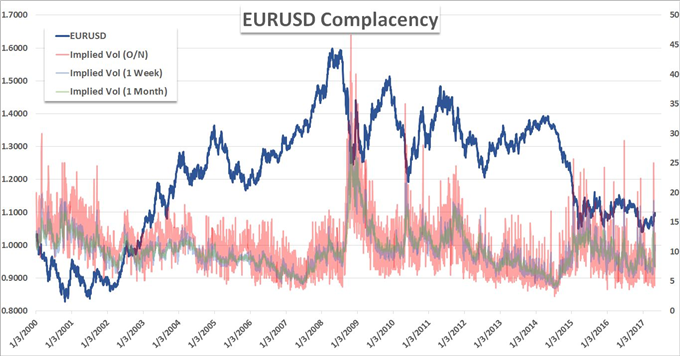