How a Return to Carry Trade for AUD/JPY, NZD/JPY Will Really Play Out

See how retail traders are positioning in AUD/JPY, the majors and other benchmark assets using the DailyFX Sentiment Data on the sentiment page.

Investors expect to be compensated for the risk they take. At the same time, there are no free lunches - in reality they may come along from time to time but are quickly absorbed by an attentive market. This is a fundamental truth that has been stretched these past months and years as complacency has lowered traders' caution and pushed them into riskier and riskier assets. When sentiment realigns to underlying value remains an open question. However, we are starting to see evidence that value itself may start down the long road of meeting lofty prices - a rebalance that may incidentally force traders to reconcile their lofty prices.

For the FX market's version of risk trends - carry trade - we find the course is already changing with the Fed leading the way with rate hikes and the extreme doves starting to pull out of their dive. Yet, how much lift will the carry currencies find in the transition from record low rates of return with so far to climb before we hit reasonable yield? With targeted event risk, NZD/JPY - one of the most explicit carry trades in the liquid market - reminded us what is at stake. New Zealand inflation data for the first quarter accelerated to a more than five-year high to put the chance of RBNZ rate hikes back on the radar. Where this cross pairs one of the most remarkable yield differential amongst the majors, it also reminds us how low the return in the market currently is. Using 1-year government bond yields as a proxy, the spread between New Zealand and Japan is the lowest on record. It is a long march higher for rates before we return to levels comparable to 2010 - much less before the Great Financial Crisis. In the meantime, the pair is already buoyant on the extreme appetites of the market.

As yield differentials slowly lift off of their extreme lows, attention will increasingly be drawn to the fact that return and cost are already on widely divergent paths. Looking at a global market overview, this is well reflected in the Risk-Reward Index that we reference regularly. An aggregate of 10-year government bond yields relative to FX market-based volatility gives a rudimentary but broad assessment of return to uncertainty. If return tracks out risk, then a rise in rates is likely to usher back in a rise in volatility which can unseat the deeply set complacency well before significant rates of return are reached. There is a significant degree of risk that comes with the inevitable turn in carry trends, but we should welcome that transition. The result of more volatile markets with more significant returns is greater opportunity, a reduction in ill-founded complacency and healthy turnover in capital. We update on what the return of carry trade will look like with the risk trends strained and the Kiwi charged by event risk in today's Strategy Video. 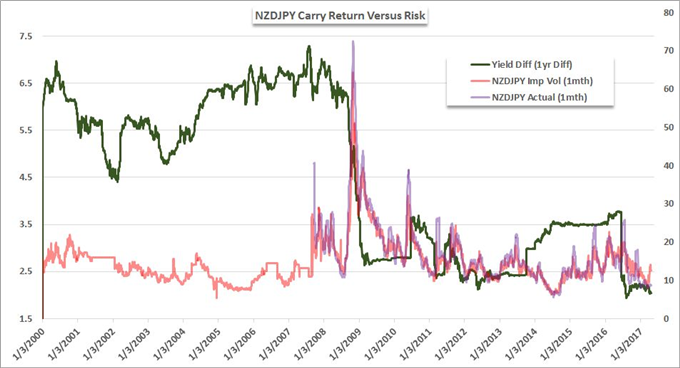 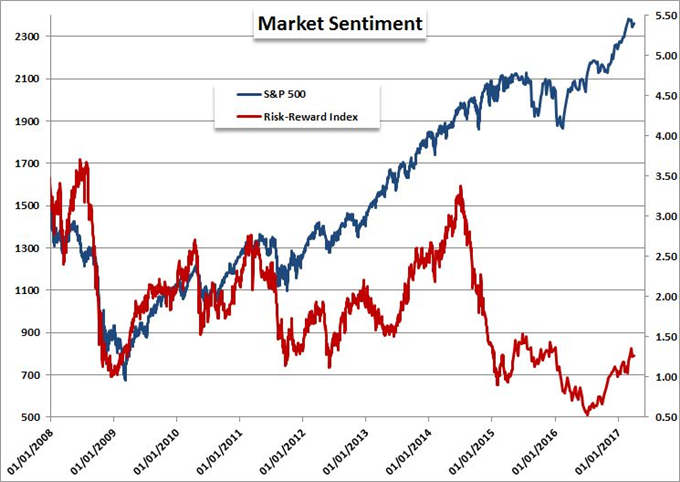