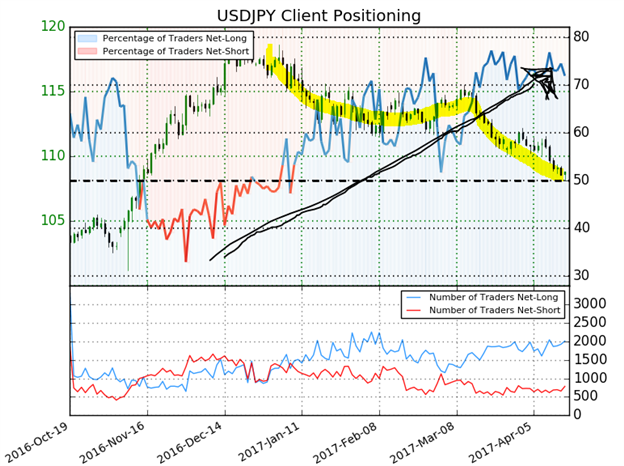 In today’s US Opening Bell webinar, we discussed technical patterns on key markets. Dow Jones Industrial Average was a market that appears to be a shallow correction. We anticipate this correction holds above 20,000 before bouncing up to new highs. One pattern we are watching is that if a new high is registered, then a more meaningful top may occur.

USD/JPY sold off into a support zone last Friday held by the 200 day simple moving average and corrective price channel. We are anticipating a bounce to occur, but that would only be the fourth wave of a five wave sequence. We anticipate that bounce to hold below the April 4 low of 110.40 (this was incorrectly stated as 110.28 in the video). If prices do move above 110.40, then the possibility elevates that a more meaningful low may have formed.

Fed funds futures are hinting at a rate hike in the second quarter 2017. Read page 2 of our quarterly Yen forecast to see how USD/JPY has behaved in the past during Fed rate hikes.

USD/JPY live client positioning has been steadily growing and now stands at ratio of +2.57 (or 2.57 net long for each net short). You can see the red sentiment line back in December 2016 was near 33% (or 2 net shorts for each net long). As sentiment is a contrarian type of signal, it is no surprise this rise in sentiment (from -2 to +2.5) has led to a price decline of nearly 800 pips. Want to learn more about trading with sentiment? Grab this guide.

Gold prices continue to pressure the upper bounds of recent price action. We recently identified a small flat pattern, which suggests higher gold prices. We are watching $1313 as a wave relationship that may slow prices down. Before then, there is a small wave relationship nearby at $1290 that may resist prices. However, we would view a sell-off to be temporary so long as it holds above $1261. We become neutral in the $1240-$1261 zone. Below $1240, then we elevate the possibility of a large triangle pattern that began December 2015.