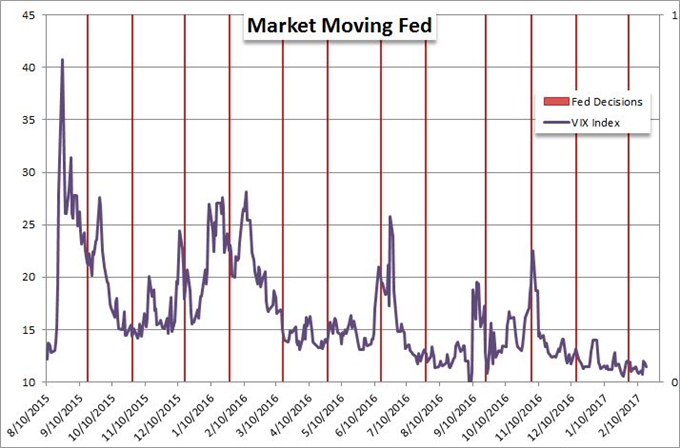 The FOMC minutes released this past session generated an unexpected response. While the transcript of the February 1st meeting was arguably a hawkish progression from previous statements, the Dollar nevertheless slipped after the highlights were digested. Is this a failing on the central bank's part? Are they being willingly or unwittingly obtuse, leading market participants to extreme swings; or is there perhaps a competing market dynamic at work warping the otherwise straightforward fundamental-price connection? While central bank bashing is a favorite sport for many traders, the Federal Reserve is one of the most consistent groups in the world. Yet, that doesn't make trading around their policy views and changes any easier.

In many investors' minds, the Federal Reserve is interminably committed to befuddling them. They seemingly change their forecasts at the last minute and have repeatedly fallen short of their own rate forecasts deeper into years. In reality, the group has not only been very transparent with its views, it has been remarkably consistent. It is true that they did not tighten at the pace they projected in previous years, but that was due to the rise of uncertainties that posed a considerable risk to their intended moves. Looking at the central bank's official change in forecast (median quarterly forecasts) and the balance of rhetoric across the members over the years, the path has been remarkably consistent. Course adjustments have certainly developed outside the 'dual mandate'; but hardly on a whim.

In the mix between Fed policy and speculative forecasting, it is the latter element that is well known to be extraordinarily volatile. Rate forecasts by the market can swing from extraordinarily skeptical and dovish to exceptionally hawkish in a matter of days with a single event. However, the same nonfarm payrolls (NFPs) updates that command the financial media's top headlines don't carry any greater weight for the underlying reading of economic and financial health in the US for the Fed. Speculation is a well-known distortion on traditional value. Therefore, when weighing monetary policy as a driver for the US Dollar; we should consider three aspects that go into judging the probability: employment; inflation and market preparation. We discuss how this change in view on a critical fundamental theme can alter our approach to the market in today's Strategy Video.