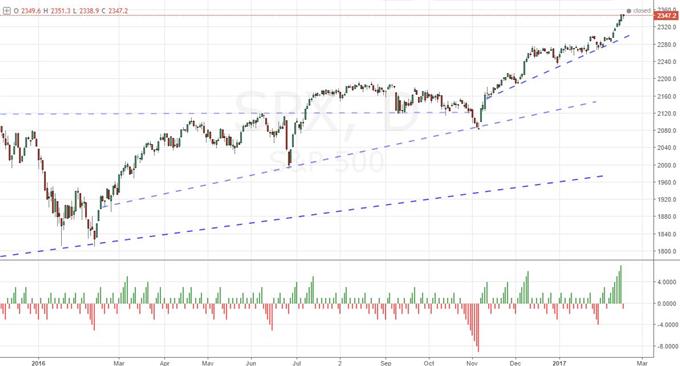 • With a remarkable consistency, record highs and impressive pace; it is enticing to suspect an equally dramatic reversal

See the DailyFX Analysts' 1Q forecasts for the Dollar, Euro, Pound, Equities and Gold on the DailyFX Trading Guides page.

Extremes in markets tend to normalize over time. However, that doesn't mean a one-sided market is going to swing in the opposite direction at the same intensity as its initial build up. Stretch can come in both the form of a persistent course and exceptional activity level. Depending on the market and circumstances, it is far less common to see the market maintain an exceptional pace and forge a dramatic reversal. Such a development results in what is often referred to as a 'V top' or 'V bottom' - statistically uncommon events. The more frequent occurrence is the loss of momentum that renders direction less relevant as the market drift into a certain type of consolidation. As historically skewed as these disparate scenarios are, a drought of trading opportunities can lead to speculative mirages.

Risk trends and the S&P 500 promote just such an appetite. On the speculative side, skepticism has been on the rise with a divergence in the performance of risk-leaning assets and a fundamental backdrop that argues for far more caution than the market is operating with. Nevertheless, US equity indexes have charged to record highs on the back of a reckless bull. A drive to record highs has been punctuated with a seven-consecutive day rally by the S&P 500 that notched the longest bullish stretch in three years. For those that were sidelined through this post-election rally and through the most recent leg higher, the 'long overdue' correction seems a certain candidate for collapse that the diligent bear could jump on for quick profit. However, the assumption of a quick drawdown is about as virtuous as expecting a risk run against a lackluster fundamental backdrop.

This past session, one facet of the speculative advance finally came to a close. The S&P 500 would post its first lower daily close in eight sessions. That said, the day's retreat was bearish in the most technical sense. The slip would not whip the bears to a frenzy, and there was little depth or breadth to the correction. Without sentiment itself to build momentum, it would be difficult for this index, region or even asset class to forge its own way. Looking back over historical instances where similar runs and records were broken, there are far more examples of mere pause followed by a more tame second phase extension than there are dramatic reversals. How should we approach this most recent bull trend break? That is the focus of today's Strategy Video.