Video: A NFPs Miss Can Leverage a Bigger Dollar Move than a Beat

The monthly US labor report is one of the market's most loaded, baseline event risks. For the upcoming November update, the data's potential impact on benchmarks like the Dollar and S&P 500 carries an even greater potential. The weeks leading up to this most recent jobs update saw a remarkable drive in speculation in the aftermath of the US Presidential election. After the unexpected victory of Republican nominee Donald Trump, expectations of large-scale fiscal stimulus and conditions accelerating Fed rate hikes rallied currency and equity index side-by-side. That swell has since crested and the masses are left assessing how deep there confidence runs between isolated strengths and global imbalances.

This week's data and news has further extended the speculative reach with hawkish views pushing to the extreme. Fed speak has maintained its target for a hike 'in the near future' or 'in 2016' while the personal income and PCE data maintain a platform for the hawkish view. The oft-ignored ADP private payrolls figures, however, may have put the cherry on top. The significant beat in a 216,000 net increase in jobs for the country sets off expectations for the 180,000 forecast for the BLS number. The data will tap sentiment through growth assumptions in the world's largest economy - running increasingly under an anticipation of growth at the detriment of trade partners - but the greater impact would be felt through a shift in rate speculation.

Looking to Fed Fund futures, the market believes a hike in two weeks is a certainty. They have further started to price in a possible follow up at the subsequent February and March meetings. That is quite the reach and an extreme contrast to the profound skepticism the market has maintained relative to Fed views these past years. There is a remarkable asymmetry to the scenarios in this event. A 'bullish' or 'hawkish' outcome attempts to motivate an already stretched view for the surrounding environment. Alternatively, it is very easy to subvert high set expectations with a 'miss'. With the Dollar and risk benchmarks showing patterns well suited to reversal; the skew is clear. We focus on the US labor report and its market scenarios in today's Strategy Video. 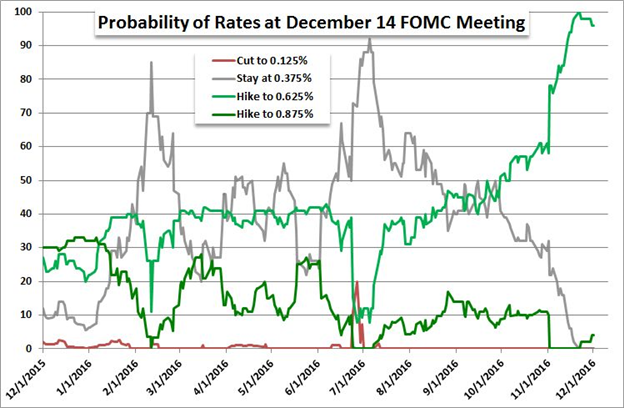