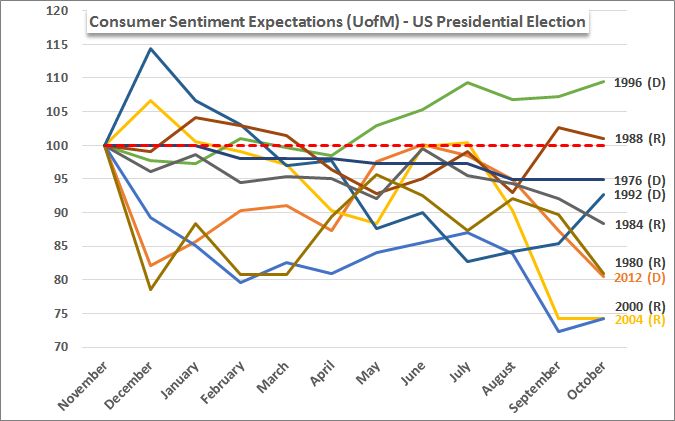 One Week to US Election and Markets Show Anxiety

Since the Brexit vote back in June, the markets have maintained a sense of warriness when it comes to important votes. A week from now, we will be looking at the exit polls from one of the most heavily covered campaigns in years: the US Presidential Election. Anxiety surrounding this event was felt in the markets this past session with a slide from all-assets with a risk orientation and swell in implied volatility measures. As we close in on the event and weigh the aftermath, there is reason to believe that this election could deviate from historical norms - due more to the general market's distortions rather than belief over the bearing of the world's largest economy under new stewardship.

Historically, November is one of the best months for the S&P 500 with deflated volume and volatility levels. During election years, however, those statistics change. In the month leading up to the polling, both the VIX and S&P 500 have shown a varied performance. In the weeks that follow the outcomes, there tends to be a consistency: the uncertainty heading in cools (implied volatility drops) and equities return to the inflation that inherent familiar from the financial product. That said, consumer sentiment does not follow the same complacent optimism that seems to lift equities. In the 12 months that follows the election, the University of Michigan sentiment survey shows a remarkably consistent slide.

In this particular cycle, conditions are significantly different such that we should not rely on the statistics of previous runs. From sentiment in the process itself, there is a mentality among the electorate that the alternative candidate will lead to disaster for the economy - regardless of party. That guarantees fear and disastifaction for approximately half the nation. That is a problem moreso due to the increasingly convictionless consolidation from market benchmarks that are already richly priced. The past three months has seen doubt rise even if prices have not slipped. A capable spark could seriously undermine sentiment - and this event is a true contender. We discuss the sentiment and risk for traders surrounding the US election in today's Strategy Video. 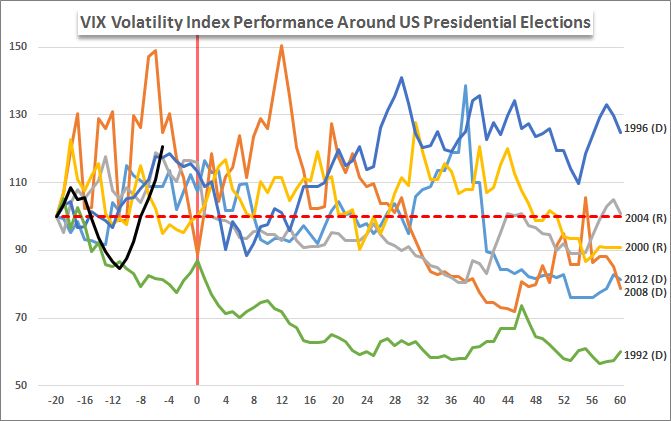