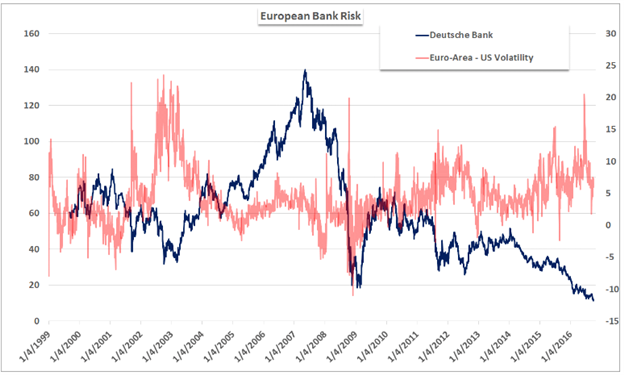 Lehman Brothers is the standard-bearer for all current financial fears - from small to systemic. The deepening troubles for Deutsche Bank present the most recent threat for global investors to compare to modern finance's greatest implosion. The exposure between the two banks is very different. Further, regulations and monitoring have vastly improved over the past eight years. That said, the Germany bank can still pose a troubling catalyst for an over-leveraged and increasingly unnerved market.

While Deutsche Bank may not have the same unchecked leverage as the US investment bank, its position in the system and the environment are just as hazardous. The exposure to trillions in derivatives is a carry over of extremes from the last crisis. As one of Germany's largest financial institutions, it is also a particularly central piece for the persistently troubled European system. That is just a few reasons why the news that the bank - already facing a massive fine by the US Department of Justice for its RMBS - was facing important client withdrawals is so disconcerting. According to reports as many as 10 large hedgefunds that clear through the bank were removing their exposure due to the perception that the counterparty risk could pose serious losses.

Moving forward, it will be important to not just keep tabs on Deutsche Bank; but it is crucial to monitor the systemic spread. Beyond a surge in put (hedge) demand for the single institution, we have seen European Banking share health deteriorate universally. And yet, there hasn't been a telltale tumble in Germany or European shares. Euro-area implied volatility hasn't swelled dramatically, but it is maintaining a considerable premium over its US counterpart. Big picture, European and global financial stress metrics are rising but still far from extreme levels. As these measures rise, the threat of crisis is far greater. And, DB won't be the only tax on the system. Commerzbank, Wells Fargo and Monte dei Paschi are just a few institutions that show the threat is global. We discuss the rise of a serious threat in today's Strategy Video. 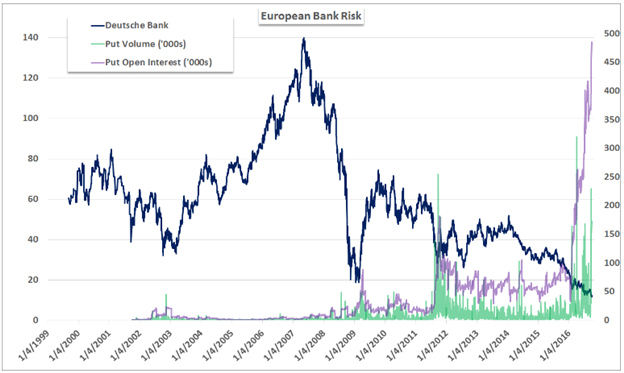