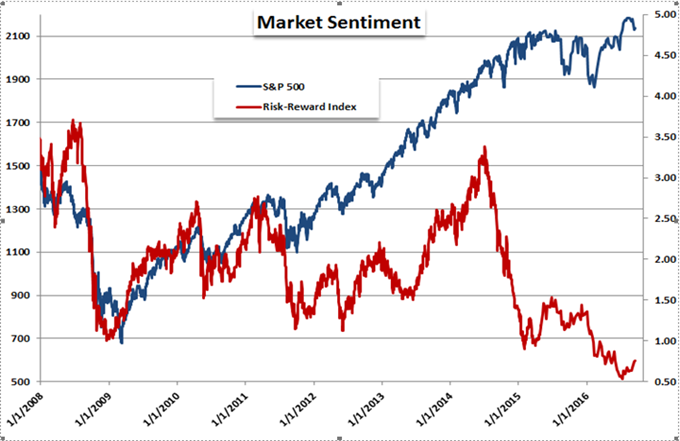 The State and Influence of Global Monetary Policy After Fed, BoJ

While the immediate volatility following the collective influence of the Federal Reserve and Bank of Japan rate decisions was restrained, the fundamental influence to the system is particularly weighty. The BoJ's efforts represent the extreme 'dovish' end of the monetary policy curve, while the Fed defines the current 'hawkish' peak. Both made efforts to cement that position on the spectrum and to even further the reach in the scale. Yet, despite the contrast, both also further erode the overall effectiveness of monetary policy. And, when this particular pillar of financial motivation falters; the result to the markets will be dramatic.

Looking back at the Japanese and US central banks' decisions this past session, we can see the material of their efforts to progress their agenda...and the sense of skepticism in the markets that shadows it. Having recognized an unfavorable market response and little economic traction to its previous introduction of negative rates (January) and upgrade to QE (July), the BoJ decided to shift its focus away from surprise escalations. The BoJ scrapped its monetary base target and vowed to pursue an overshoot of 2 percent inflation, maintain a zero percent 10-year JGB yield and support the yield curve. This can be construed as a decision to bow to market influence and prevent a financial crisis rather than find the storm. For the Fed, a hold was accompanied by a clearer signal for a hike than we have seen in some time. A median forecast for a hike in 2016 in the SEP, three dissenting votes and language more explicit to intentions set the tone.

For a market reaction, the currencies responded with a move that contradicted normal expectations - the Yen appreciated and the Dollar advanced. Efforts to devalue the former and indirectly/unintentionally lift the latter through forward guidance have faltered. Skepticism in response to policy efforts has become commonplace and virtually immediate, and that should concern investors and traders. In the underlying fundamental assessment of markets, speculative reach beyond fundamental footing has grown to troubling proportions. A critical support to this climb has been confidence in (or at least an attempt to take speculative advantage of) monetary policy. What happens when this strut breaks? We discuss the overall position of monetary policy and the serious systemic implications in today's Strategy Video.