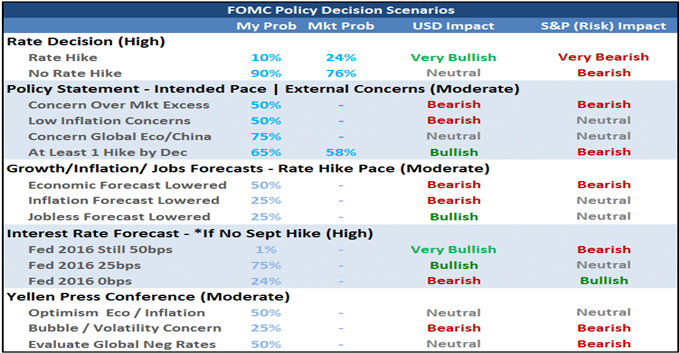 Join the FOMC rate decision and see what other live coverage is scheduled to cover key event risk for the FX and capital markets on the DailyFX Webinar Calendar.

Whether you are trading the Dollar, US equities, global equities, Treasuries or any of the major asset classes; you should tune in to the FOMC rate decision Wednesday. There are few events that can tug on virtually all areas of the global financial system, but deliberations on US monetary policy is certainly one of them. While the probability of a rate hike at this meeting is low, the speculation surrounding its outcome and sensitivity of the market to the health of the economy amplify its impact. In the midst of a transition from the extreme quiet from July and August to the abrupt swell this past week, investors should monitor both the short-term and lasting impact of the event.

In fully appreciating the event risk, it is important to recognize there are different elements to this release that need to be accounted for. The rate decision itself will cater to the superficial assessment of the comprehensive event - and thereby the first response for volatility. The market (Fed Fund futures) are pricing in a 24 percent probability that the Fed hikes 25bps to a range of 0.50 to 0.75 percent. The balance is afforded to no change. The deeper cut from this event is the Summary of Economic Projections (SEP) with a particular emphasis on interest rate forecasts through 2016 and 2017. If they lower projections without a hike, it will be considered a generally 'dovish' outcome. Further up for interpretation will be the policy statement, economic forecasts and Chairwoman Janet Yellen press conference. Though, those elements will be assessed in context of rates now and projected forward.

The impact that this event carries for FX versus financial markets will be materially different. The scale of divergence between the Federal Reserve's monetary policy standing and that of its peers provides a margin of appeal. While the yield differentials may be small, the absolute contrast is significant and makes the Greenback a more attractive safe haven. Alternatively, for the world's financial assets; the growing recognition that stimulus was responsible for the exceptional risk reach creates a situation where it is difficult to truly charge optimism further. We discuss the importance of the FOMC rate decision and the scenarios for market impact in today's Strategy Video.