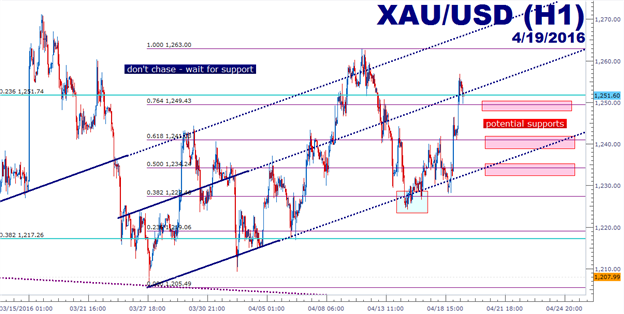 - This is an archived webinar that previously took place in the DailyFX Live Trading Room. The description below provides a synopsis of points covered, including relevant links to provide more information behind key topics and themes.

In this webinar, we took a look at price action in key markets with a specific focus on Oil after this weekend’s lack of a deal out of Doha; while also looking at how a weaker US Dollar has brought on stronger prices in Gold and US Stocks.

The main topic for today’s webinar was trading Oil in a post-Doha world, referencing the meeting over the past weekend in which Oil producers representing more than 50% of the world’s oil supplies could not come to an agreement to cap production, which has been one of the sources of strength in the Oil recovery since mid-February. The initial response was brutal as Oil gapped lower to start the week, but as we had written, it was still far too early to call for a return of the down-trend.

Instead, we can use price action to investigate technical structure, and avoid looking at short positions until lower-lows actually come into the market to prove that the downtrend may, in-fact, be returning.

We can apply a similar such approach (let the market show me it’s bullish before buying or bearish before selling) can be applied across the spectrum. The US Dollar has been extremely weak and traders are faced with the prospect of selling while we’re at support. And sure, maybe support breaks and prices move lower; but the far more favorable route is to wait for prices to hit some level of resistance so that, at the very least, traders can more efficiently manage their risk.

This is similar to the approach that we discussed in both US Stocks and Gold. Both markets are currently sitting near some form of resistance (Gold is at short-term resistance while SPX is at intermediate-term resistance).

We walked through two separate setups last week in SPX500, looking to buy off of 2,040 while still in the bull flag formation, and then again later in the week off of the 2,065 Fibonacci level. We updated that setup earlier today in our Market Talk article, and in the above webinar we were able to get more in-depth behind the current technical setup in the S&P 500.

A similar, albeit more subdued move and scenario can currently be seen in Gold. After the near-meteoric rise in Gold prices around the beginning of the year, driving into the second week of February; prices had begun to range throughout much of March. This led many to looking for short positions under the presumption that the near-20% pop that was seen at the start of the year was somewhat aberrational. Price action did not suggest as such, as ‘big picture’ support has remained fairly well-defended on the longer-term charts (daily in particular).

Below is the currently hourly chart on Gold, and we’ve setup the most recent major move with a Fibonacci retracement to plot potential re-entry levels (shown in purple); along with a longer-term Fibonacci retracement in aqua. Traders can look for price action support at each of these support intervals to plot potential top-side re-entries. And if you’re looking to use price action to trigger into entries, please check out our article, The Price Action Trigger.